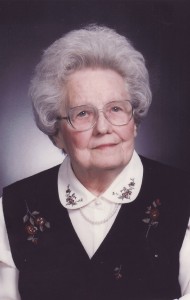 Joan was a piano teacher for more than 75 years and 40 years in the local area.

She was member of the B Natural Music Club and the Iowa Music Teachers Association.

She was preceded in death by infant twins and one brother, Robert Hoover.

Memorial services will be 10:30 a.m. Monday, March 11, at the Kearns, Huisman-Schumacher Chapel, 3146 Kimball Avenue, Waterloo, Iowa, with a private family burial in the Orange Township Cemetery. Friends may call at the funeral home from 3:30 – 5:30 p.m., Sunday, and one hour prior to the service on Monday.

Those who wish may direct memorials to Cedar Valley Hospice or the Friendship Village Auxiliary.