A story at the online news site, InkFreeNews, features the new Grace College men’s soccer coach, Aaron Patrick. A portion of the story appears below. Click here to read the complete article.

All Roads Lead Patrick To Grace 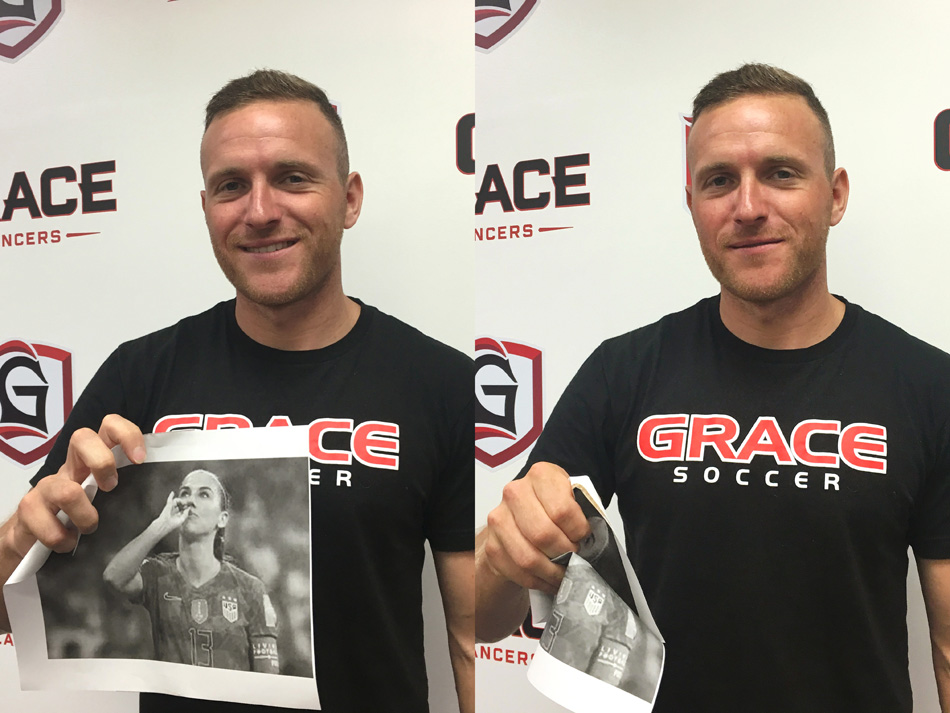 ‘Welcome to the family’ ribbing has caught up to new Grace College men’s soccer coach Arron Patrick, who is finding printouts of Alex Morgan everywhere he goes. (Photo by Mike Deak)

Whether one believes in a higher power or not, something was in the works for Arron Patrick and his road to becoming the Grace College men’s soccer coach.

Life on the pitch was good for Patrick, who was starting the offseason prep after finishing his fifth season on the sidelines for the Goshen College men’s soccer program. But a shift was in the works, whether Patrick knew it or not. Some slight rifts within the college had Patrick jaded but still feeling loyal to his players. Then came a text message he never thought would come.

“The timing couldn’t have been better, but couldn’t have been more strange,” Patrick said of the text message outgoing Grace College head coach Matt Hotchkin sent Patrick announcing he was leaving and the job opening could be his. “I certainly wasn’t expecting that.“

Even within the process, Patrick still felt torn. Curious about a possible change to greener pastures, Patrick got into his truck and began his drive from Elkhart, where he and his wife, Callie, had built their new home. Listening to one of his favorite songs, he felt a will to fight through flowing tears and a present fear, and keep working down those country roads to Winona Lake. Patrick eventually made it and met with Grace College athletic director Chad Briscoe and the college brass.

The rest as they say, is history.