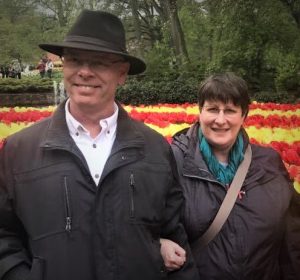 I was raised in a family that honored the U.S. flag and had a deep sense of patriotism. However, I think there is a difference between having a sense of patriotism and being a patriot. My experience on September 11, 2001, demonstrated what a patriot actually is. I was an Air Force Chaplain stationed at Andrews Air Force base located in Maryland, just off the beltway. When news of the attack on the Pentagon was announced, I was sent to the Pentagon to provide pastoral care for emergency responders and victims. It was there that I met three examples of people who didn’t just feel a love for our nation, but whose love for the United States called them to action and made them patriots.

I arrived at the Pentagon in the early evening as smoke billowed from the roof. Members of the FBI, Office of Special Investigations, and others from the Federal Aviation Administration were piecing together the remains of the plane that was used in the attack. Fire trucks kept a constant stream of water pouring through holes cut in the roof of the building. Teams of firemen rotated into the building, taking their turn fighting the flames. As the hours went by, people left for the day. In the end, all that was left were the firefighters. Teams continued to rotate in and out of the Pentagon, relentlessly battling the flames. Each would leave the Pentagon and unload their heavy gear before sitting to rest, cool, and get a drink before their next shift. Here were people who had a duty and refused to walk away in the moment of crises. Instead, they stayed throughout the night. The fight against the flames became their battle to defend the Pentagon and the United States. The longer I watched, the more I admired their courage.

Late in the evening, I stood in the courtyard as a naval officer came from another part of the Pentagon and walked up and stared at the destruction. He spoke briefly, and then he said that he needed to get into the fire-damaged section to retrieve some documents. I took him to a fire-fighter who escorted him into the building. I thought about the officer and wondered why those documents were so important that he needed to retrieve them from the hot ruins. I then realized that though the nation was in shock, and we were recovering from a great disaster, the defense of the country could not rest even for a moment. The officer was given the responsibility to provide for the defense of the nation, and he was not going to allow anything to interfere with his mission. I appreciated his dedication to a noble cause.

In the days that followed, I interviewed many airmen, sailors, and civilians. I saw many civilians who were traumatized by the attack and had difficulty just being in the building. Military members seemed to adjust much better. I asked one Air Force officer if he was angry about the attack. His response surprised me. “No,” he said, “We were attacked, and now we are preparing our response.” The difference between those in the military and those who were civilians seemed to be their training. The military was trained for an emergency and were focused on their job. They were mentally prepared to respond to a crisis. It reminded me of the Minute Men during the Revolutionary War. They were ready at a moment’s notice.

Many patriots who responded on September 11, but the three I met exemplified three qualities of true patriotism -courage, dedication, and preparation. Though it could be said that they felt a love for the nation, what made them patriots is that their love moved them to action. They weren’t critics, skeptics, or conspiracy theorists. No, they were patriots who served the nation.

This story was written by Major Carl Phillips. Send him an encouraging note here. Learn more about the Eagle Commission here.