Paul Lauster With the Lord 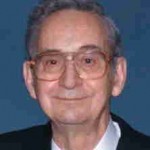 He was born on October 6, 1921 in Rural Valley, Pennsylvania to William P. and Dora (Roney) Lauster. On February 22, 1950 he married Mary E. Cox in Kittanning, Pennsylvania.

He was manager of Lauster Milling Company, a third generation family owned business founded in 1904 for 9 years, prior to moving to Winona Lake. He retired from the Times-Union in 1999 after 50 years. He also was employed at Clausing, Inc. for 15 years.

In Pennsylvania, Mr. Lauster was a former city councilman and chairman of the American Red Cross. He was the elected finance chairman for the National Christian Radio Broadcast (Friends of McIntire) for 22 years.

He served in World War II from 1944 – 1946 in the 6th division of the United States Air Force. He earned the rank of Sergeant and was an armor gunner on a B-17 bomber and later on a B-24 bomber. He was stationed on a U.S. Air Base in the Galapagos Islands; a province of Ecuador in the eastern Pacific Ocean.

He was a graduate of Rural Valley High School, PA. in 1940 and graduated a salutatorian of his graduating class at Grace College in Winona Lake in 1955. He also graduated from Grace Theological Seminary with a Masters of Divinity Degree in 1960.

Private services are planned at McHatton-Sadler Funeral Chapel Wednesday, May 12, 2010 at 2290 Provident Court, Warsaw with the Reverend Glenn Byers officiating.

Burial will be at Oakwood Cemetery – Warsaw, IN.