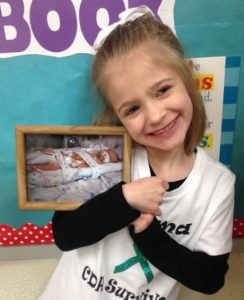 Emma Mazingo is a seven-year-old fighter, whose strength allows her to fight for other children born just like her.

Emma and her family attend First Brethren Church, a Charis Fellowship congregation in Buena Vista, Va. (Mike Hamilton, pastor). Emma was born almost eight years ago on March 31 with a congenital diaphragmatic hernia (CDH), which is an opening in the diaphragm that allows organs to move up into the chest.

“When she had her surgery at seven days old, three-quarters of her diaphragm was missing. This allowed her stomach, spleen, and intestines to crowd the growth of her left lung,” says Kristyn Mazingo, Emma’s mother. “Surgery was performed to move all her organs back below the diaphragm, and a patch was placed to act as a diaphragm. Emma stayed in the NICU for 32 days.”

With Emma’s birthday being the same day as CDH Awareness Day, the family felt it was the perfect time to celebrate her life by giving back to other children. They started a yearly “pay it forward” campaign in her honor.

The idea of paying it forward started on the ride to the NICU in a larger hospital. “As we prayed, we recognized that God knew Emma’s purpose in life, and if her purpose were to live hours or years we would always pay it forward,” says Kristyn.

Since then, the Mazingo’s have done something every year in March to raise CDH awareness.

The books, hospital care bags, socks, and other items are delivered to local hospitals. This year and last, Emma has chosen how she wants to pay it forward, and First Brethren Church tries to double her goal.

“Emma’s goal was to collect 378 pairs of socks last year, and she ended up collecting almost 1,400 pairs. We also provide a meal around her birthday to the Ronald McDonald House where we stayed when she was in the NICU. Emma loves to plan pizza parties for the families there,” says Kristyn.

“Emma is an amazing young lady with a heart of gold,” says Hamilton, Emma’s pastor. “I told her last year, ‘No matter what you decide Emma, we will triple it next year!’”

This year, Emma’s goal is to collect 304 baby blankets. These (and monetary donations to purchase blankets) are being collected now through the end of March. When Emma goes to purchase more blankets, she will share her story with the cashier.

People often wonder what the Mazingo’s are doing when they make such large purchases of one item.

“Emma will excitedly tell her story. She will talk about how she was born with CDH, that she almost died as a baby, and now she wants to do things for other sick babies,” says Kristyn.

Throughout all these efforts, Emma has stayed strong. She has additional complications from CDH, which include pectus excavatum, reflux, scoliosis (for which she wears a brace 16 hours a day), and learning difficulties.

“She has an amazing outlook on life,” says Kristyn. “This girl has had to fight every single day of her life but has done it without even considering giving up. The most important thing we have learned as a family is that God has created a story for each of us. It’s a story that may challenge us at times, but one that we were made for on this earth. Emma’s battle reminds us to stop and smell the roses, take in life, and enjoy every moment, big or small.”

[Connect:]
Click here to send a note of encouragement to Emma, or to learn more about donating toward this pay it forward campaign.