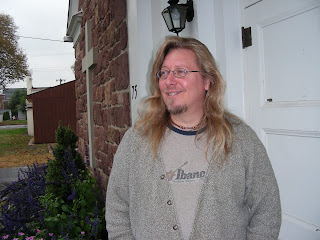 It’s not the most glamorous ministry but that doesn’t bother Kork Moyer (pictured at right). He knows he is exactly where he’s supposed to be.

“This is where God planted me,” he says, surveying the room where Still Waters, a Grace Brethren church in Pottstown, Pa., meets. The well-worn community center is owned by the neighboring Lutheran church. Not only is it home to the Grace Brethren congregation, but in the corner is a makeshift office for the Lutheran congregation, a necessity since their former office in the basement of the building was damaged in a flood last summer.

Still Waters deviates from what is generally considered “church” in most American communities. Perhaps that’s because Kork himself is not the typical Grace Brethren pastor. His flowing blonde hair and pierced ears might be out of place in a typical middle class congregation, but for his work among the homeless and disenfranchised in Montgomery County, Pa., he is right at home.

But it’s not always a comfortable or easy situation. Efforts to begin a homeless shelter in the now-renovated basement of the community center have been thwarted by local zoning officials. Even short-term efforts by area churches to provide shelter for those who are less fortunate have been frustrated. (For more information, click here.)

“We are forced to struggle each day to find a way of sheltering them, and not lose any of our friends to the elements,” he says, as he asks for prayer. “We are so tired and brokenhearted when we see people eye-to-eye, and tell them we are not allowed to shelter them. It rips your heart out, and is not something we can do much longer.”

The impending holiday season doesn’t seem to make a difference. “For some of my friends, this is a brutal Christmas,” he adds. “’I guess 2000 years later, there is still no room at the inn.”

He began working with the poor in Pottstown more than 15 years ago, while he was working in the regulatory office of a local utility company. Once a week, he and his wife, Melissa, would take a crate of oranges, sandwiches, and juice from a fast-food restaurant to distribute on the streets.

“We’d set up tables, like a café,” he recalls. “We’d never proselytize,” he admits, “but every week, God would show up!” He says he would find himself engaged in fruitful conversations with individuals who wanted to know more about Jesus.

For Kork, it’s all about being the church. “We are not called to be Christians,” he says. “We’re called to be disciples.” His work in the suburban area about an hour northwest of Philadelphia picks up where many traditional churches leave off.

The ministry in Pottstown centers around a weekly worship service, or tabernacle, as Kork calls it, at the St. John’s Community Center. During the week, house churches meet throughout the community, all led by Kork.

“We want to provide a space that is dignified,” stresses the pastor, noting that many people are without homes because of mental illness or other issues, not because they are lazy. “They see the judgmental attitudes and hear the accusations of many people,” he adds.

He’s not shy about telling those he meets about their need for Christ. “He’s bold,” notes Jim Snavely, former northeast career missionary for Grace Brethren North American Missions. “A number of them have accepted Christ.” He also acknowledges that many of the people involved with the ministry in Pottstown would be considered unreachable by most churches.

Kork feels deeply about the ministry to which he has been called and he hopes to lead others to see people the same way. “If someone knocks on your door and says, ‘I’m cold,’ how can you turn your back on that?” he questions, tears welling in his eyes. “Taking care of homeless people is how we praise Jesus.”