During this morning’s Momentum session, Tiffany Tabor, daughter of Pastor Mike Tabor of The Happy Church, Jackson, Ky., performed a song she composed and wrote based on her testimony. Tiffany shared the background for the song, noting that God led her to write the song after experiencing heavy tragedy and loss. “He told me, ‘If you obey me, not only will I heal your wounds, but I can make the pain you went through worth something.’”

After a time of worship and games, Jackie Hill-Perry, an American poet, writer, and hip hop artist, took the stage, sharing her story of growing up in a single-parent household, and being exposed to pornography and sexual abuse at a young age. She struggled with confusion about her sexuality, and began to live a lesbian lifestyle starting in high school, as well as getting into drinking and theft.

Spending time with her aunt, who was a follower of Jesus, led her to question her lifestyle more deeply, which she said she knew was sinful. However, she struggled with how to bring her questions to the church.

“It felt as if the church was not a safe place to speak about how my soul felt,” she said. Yet, although she technically enjoyed her lifestyle, true joy eluded her.

“I could not get a hold of peace. I felt like God was calling me but I didn’t want him. I thought Christianity was just a bunch of dutiful people.”

Hill-Perry recalls calling up a friend who was a Christian, the only one who wouldn’t just “preach hell” to her, she said. Instead, her friend preached truth.

“God is going to show you how much you need him,” her friend told her. And He did, putting her through a series of trials. Hill-Perry says that these trials were God’s goodness to her, and she finally started listening and responding to his voice, eventually giving her life to him.

Hill-Perry stressed that preaching the gospel should focus on Jesus and the change he brings about in a person’s heart, not just individual lifestyle changes like homosexuality. The changes in behavior, she said, come from the change of heart.

“We can’t preach marriage – we need to preach Jesus,” she reminded her audience. “Ultimately, God wanted me to know him…This time, I cared what God thought.”

She also challenged the idea that once an individual is saved, they will no longer struggle with temptation, reminding her audience that Jesus himself was tempted.

“Some people in the church have propagated the lie that being saved means not struggling with temptations. Temptations can’t define deliverance. Being a believer means now I have the ability to flee.”

She finished her talk by reminding the youth that Christianity is ultimately about a relationship – “At the end of the day God made you for himself. He’s calling you to delight in him,” she said.

After a time of prayer and worship, students were released for an afternoon of activities, including options such as a painting class, ultimate Frisbee, climbing wall, and a 5k obstacle challenge. 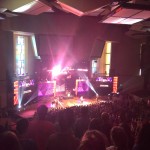 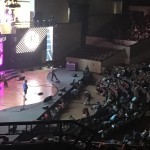 After hearing from poet and speaker Jackie Hill Perry, students kneel in the aisles and in their seats to pray for purity and holiness. 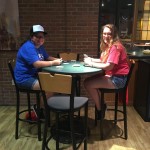 Momentum students take a break from a game of cards in between sessions during this Friday’s Momentum.