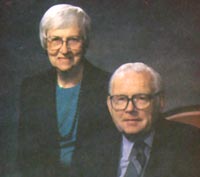 He taught journalism part-time at Grace College in the 1960s. As the former editor of “Youth For Christ” magazine, he was the “real deal” – an editor who wrote for an international audience, selected articles from freelancers, and put the magazine together. The opportunity to learn from an experienced practitioner was a rare privilege which I will always appreciate.

In those days, almost everyone living in Winona Lake appeared in one or more Ken Anderson films. My happy memories include acting in “Toby’s Treehouse” and “Hobo and the Runaway” (my “big” ones) along with “Senior Year” (I was a high school principal and helped roll the car over), “Held for Ransom” (I was one of the bankers) and others.

Not too long ago, on one of my “big round zero” birthdays, my wife pulled a surprise birthday party with our church and the “featured entertainment” was old Ken Anderson films in which I played a part!

Treehouse Farm, out near Claypool, also figured heavily in our lives those days. Not only was it a site for filmmaking, we also had campouts on the farm and occasionally spent the night in the farmhouse. One night I walked all night to keep one of Anderson’s horses from dying-apparently it had messed up its intestines somehow and had to be walked continuously. I really don’t remember whether it eventually died of that malady or not.

The Ken Anderson Films studio down on Winona Avenue became a crossing-point for much of the Christian world. One day I was in there, heard a familiar voice, and discovered it was a grad-school friend from Singapore who was in the studio dubbing one of Ken’s films into Mandarin Chinese. You never knew what Christian luminary you might encounter in and around the Anderson studio!

In later years, after we returned to Winona Lake in 2003, we would often see Ken and Mrs. A. at MasterWorks programs and other good classical music concerts. The last I saw him-quite feeble and using a walker-was one night as they were out to dinner together at Bennigans.

Ken Anderson was one of my heroes. The crowns HE will receive are many because of his lifelong involvement in Christian media and mission. I pray that somewhere God is preparing the next Ken Anderson-perhaps in the journalism programs of our Christian colleges-and that future generations will be impacted with the Gospel because of one creative, passionate young communicator who uses ever-changing media to transmit the never-changing message.