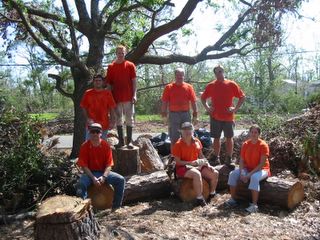 
Chris Bartholomew, one of our team members, had a contact in Longbeach
who was an ex-coworker. Tommy Kellog’s house was supposedly only one block off the beach. We had heard that his house was still standing and that he had requested our help.

We had to go through a National Guard checkpoint and they gave us a very hard time. We were beginning to wonder if they were going to let us through but finally they did.

The roads are blocked by the military at the railroad tracks. The tracks run parallel to the beach and are up from the beach about five blocks. The area seems to be guarded because of a combination of things, including fear of looters, dead bodies, dangerous utilities, and an extreme amount of damage and debris. Sections of Highway 90, that runs next to the beach, are gone or are impassable.

We were on Highway 90 but were having a hard time finding Destiny Drive because most of the street signs are gone. We finally found it but the entire area as far as you could see had no homes standing–only horrible devastation and debris everywhere.

The rotten stench in the air was strong and a smell you would never forget. We began driving up hill on Destiny Oaks Drive, trying to avoid construction debris in the road so we would not get a flat tire.

As we approached the top of the hill there was a lot of activity as some large excavation equipment was removing tons of debris with huge dump trucks. There were no houses standing on this road, or so it seemed. Then we saw a white house at the very top of the hill.

There must have been 15 to 20 house lots we had gone by that had nothing left but a cement pad and debris, but now there were a few houses on Destiny Oaks Drive, that were left standing at the crest of the hill. The houses on the streets to the right and to the left of Destiny Oaks Drive were all gone.

It was an eerie feeling to know that for some reason God choose to spare this family’s home. Theirs was the first house the 25 + foot ocean surge wave spared. Their house is a half-mile or more from the beach. It was unbelievable! It was a miracle!

We worked on Tommy’s house and his next-door neighbor’s house. Our goal with his neighbor’s house was just to dig down and try to find where the driveway was and then to clear it off. Then we began to clear debris all around both houses.

The neighbor’s property had not been touched since the hurricane and we found ourselves digging through mud and a soupy mixture of debris. We prayed that we would not come across any body parts or anything that would be too disturbing for the team. Thankfully, we did not. The kind of work we did here was the most physically demanding of the whole week.

Tommy Kellog and his wife were so thankful for the work we did. It was a great feeling to see how the little work that we did was such a blessing to them. These people just need some hope and many are not getting any. They are emotionally in shock and they need people to love them and be there for them. Everywhere we go people say that only the faith-based groups are doing anything to help them.

If anyone has a heart to help these people, there are tremendous needs. There will be opportunities for mission teams for the next nine to 12 months.

Thank you everyone for your continued prayers!