Peterson Ready to Return to Volleyball

The online news site, InkFreeNews, reports on the return to volleyball by a local standout athlete. After several years off, Emily Peterson will be returning to the court at Grace College. A portion of the story appears below. Click here to read the complete article. 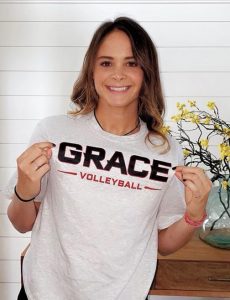 After a couple years away from the game, Emily Peterson has signed with Grace volleyball.

When the game is taken away from you, you tend to miss it more. For Emily Peterson, she has a chance to get her hands back around the game once more.

After years away from the game of volleyball, Peterson is returning to the court with Grace College. The prep superstar at Tippecanoe Valley has battled some unfortunate bad luck with injuries during her prep career, but is looking to turn that around with a chance with Kate Van Hofwegen’s program.

Looking back at Peterson’s evolution as a prep star at Valley, from the jump she impacted the team as a freshman in 2015. It was that season where Peterson had to grow up quick, seriously injuring her shoulder during warmups before the rivalry volleyball game against Rochester. Able to come back from it her sophomore year, Peterson shifted from an all-around player to a full-time setter. As a freshman, she piled up 172 helpers while adding in 61 digs and 46 kills. Those numbers accelerated precipitously into year two, where she piled up 623 assists, 147 kills, 118 digs and 23 aces for good measure.

A healthy move from sophomore to junior year saw Peterson do more of the same, running up 721 assists plus 116 digs and 50 kills as her comfort for commanding the offense was growing.

But as Peterson was helping Valley’s volleyball program make strides in 2017, it was another injury shortly into 2018 that derailed her prep success. In the girls basketball sectional tournament at Fairfield, Valley was thwarting Lakeland in the opening round and Peterson was commanding the floor. On a fast break opportunity, Peterson’s knee gave out and a lopsided win turned into what felt like a funeral in the gymnasium as Peterson’s season, and ultimately high school career, was over.