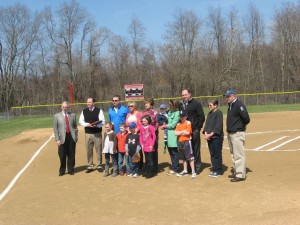 The late Grace College coach and athletic director Phil Dick was honored today, Tuesday, March 30, as a pressbox and scoreboard at the Lancers’ Miller Field were dedicated in his honor.

The pressbox and scoreboard were provided in Dick’s honor by an anonymous donor, and just before the Lady Lancers took the field for a game against Goshen College, a short ceremony and dedicatory prayer honored the late coach.

Dick, who died April 4, 2008, of cancer, was a Grace College alumnus who returned to his alma mater as athletic director and softball head coach from 1981 to 1994. One of the highlights of Dick’s coaching career was in 1994 when the Lady Lancers upset the No. 1 seeded team at the NAIA finals in Columbia, Missouri.

Dick was from Winchester, Virginia, where his father, Paul Dick, was a Grace Brethren pastor for more than three decades. Present at today’s ceremony were Dick’s wife, the former Rebecca Crawford, his brother Rich Dick, who was also a standout athlete at Grace College, and Dick’s children, their spouses, and grandchildren.

Dick began his teaching and coaching career at North Webster Junior/Senior High School in 1965, and over the years he coached baseball, track, basketball, and was instrumental in beginning a Little League community program in North Webster.

The current Lady Lancer head softball coach, Heather Johnson, who played under Dick, said, “You knew you could go to his office anytime. Whenever we needed help with anything, Coach was there.” Ron Henry, who was assistant coach under Dick, recalled, “He had the ability to assemble and mesh personnel into winning ball clubs. He truly was a winner.”