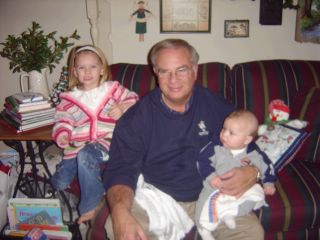 Many are praying for Phil Dick (pictured with grandchildren) of Winona Lake, Indiana, who is just about to enter treatment for cancer in both lungs.

Phil’s daughter, Michelle, is making regular journal entries on a CaringBridge website for those who wish to keep updated on progress and prayer requests for the Dicks.

An edited portion of one of her first posts is, “Dad was diagnosed with kidney cancer on January 9, 2006. He underwent surgery on January 18th to have his kidney removed. His pathology reports came back a week later; they believed they had gotten it all.

“As a precaution and motivated by her positive experience this fall with her breast cancer treatment, Mom made an appointment with Dr. Schwartzendruber of the Goshen Cancer Care Center. They met with Dr. S. on February 10th. He ordered a battery of tests, including a CT scan on Dad’s chest (and a head MRI because of dizziness Dad had been experiencing). He was told that night that the CT scan showed nodules on his lungs and the MRI on his head was clear.

“A biopsy done on February 14th confirmed our fears that the kidney cancer had spread to Dad’s lungs.”

Phil, at his request, was recently anointed in a prayer service by the elders of WLGBC. For updates on Michelle’s journal, or to send a message to the family, visit www.caringbridge.com and enter sitename phildick.