Phoebe A. Boze, who with her husband, Dr. Robert L. Boze, served as short-term medical missionaries to the Central African Republic in 2001 and 2002, has died. (He died in 2005.) The couple were active members of Bethel Brethren Church, a Charis Fellowship congregation in Berne, Ind. Her obituary appears below. 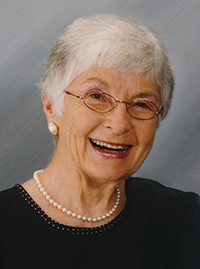 A tireless helper in her community, her passion was ministering to children. She taught Good News Club for decades, enjoyed evangelism through clowning and volunteered as a Cub Scout den mother. As a member of the Bethel Brethren Church in Berne, she served extensively in its children’s ministries and as a deaconess in addition to multiple other leadership roles. She and her husband served for one year in the Central African Republic as medical missionaries. Over the years, she volunteered as a nurse for several organizations, including migrant ministry in Adams County, Grace Brethren Church Camp and American Red Cross blood drives.

She was preceded in death by her parents; her husband on October 17, 2005; son, Timothy Boze; sister, Eva Mae (Buel) Green; brother-in-law, Gene Gordon; and brother and sister-in-law, Roger and Zola Buel.

Visitation will be Friday, June 18 from 2-8 p.m. at Zwick & Jahn Funeral Home, Yager-Kirchhofer Chapel in Berne and one hour prior to the 2 p.m. funeral service Saturday, June 19 at Bethel Brethren Church in Berne. Officiating will be Pastor Joe Nass. Burial will be at MRE Cemetery in Berne. The family requests that all individuals please wear masks for the visitation and funeral service.