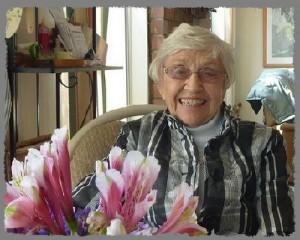 Wilhelmina Phoebe Schilperoort was born February 1, 1919, to William and Niecia Schilperoort, recent immigrants from Holland, who settled in the lush Yakima Valley in Washington State.  Phoebe grew up as the first daughter among nine children, three girls and six boys.  As the boys were out working on the farm, the girls helped mom with the household chores.

Phoebe graduated valedictorian from White Swan High School and soon met a dashing young man from Sunnyside, Glenn O’Neal, who whisked her away to Winona Lake, Indiana, where he attended Grace Theological Seminary.  The Grace Brethren Church in Canton, Ohio, called the young preacher and his beautiful wife to their congregation.  During the two years in Canton, Phoebe gave birth to son, Dale, and daughter, Donna.  Two more daughters, Rebecca and Roanna, were born to Glenn and Phoebe during a pastorate at the Brethren Church in Ashland, Ohio.

Glenn heard the call of the West and accepted the pastorate of a Brethren Church in Santa Barbara, California, where fourth daughter, Phyllis, was born.  The lure of the big city saw the now growing family move to Inglewood and a pastorate at the First Brethren Church of Los Angeles (Inglewood).  Although deeply involved in child-rearing and household duties, Phoebe always found time to be a charming hostess for visiting missionaries and special speakers.

Phoebe’s world changed considerably when Glenn accepted the position of professor at Talbot Theological Seminary in La Mirada, California in 1961.  Although he had been a part time professor for several years, he now was full time, and the O’Neals moved to Anaheim, California.  Here, Glenn and Phoebe started a rest home called “The Hacienda.”  Having seen the unfortunate plight of too many elderly in unkempt facilities, it was their goal to provide a comfortable and pleasant home for ambulatory guests.  For the next ten years, Phoebe was the administrator and chief “mom” of this home.  While it was an exhausting time, the rewards of seeing the joy in the faces of the guests made it worth the effort.

As wife of a seminary professor, Phoebe became involved in the Seminary Wives organization.  She was a leader, speaker, organizer, entertainer, and general supporter and encourager of the wives who would one day be facing the daunting task of “pastor’s wife.”  Embracing this role enthusiastically, Phoebe endeared herself to an entire generation of Talbot pastors’ wives.

The world changed again for Phoebe when Glenn was diagnosed with colon cancer.  After several years of treatment, remission, hope, and eventual progression of the disease, Phoebe’s dear husband left this world on February 18, 1985.

Already involved in the Bible Study Fellowship program (since 1970) as a group leader, Phoebe could have withdrawn and sat home feeling sorry for herself.  Instead, she got involved in two additional ministries: volunteering at the Living Well Crisis Pregnancy Center and serving as deaconess at the Evangelical Free Church of Fullerton.

Further lighting up her world were the visits of children, grandchildren, and great-grandchildren.  Activities included picnics in the park, Easter egg hunts, Saturday morning waffles and strawberries—with gobs of whipped cream, playing games, and reading those same bedtime stories over and over.

Her abiding and constant faith has sustained her through the trials and tribulations of her full and vibrant life.   She has been an inspiration to so many people throughout the years, and has always chosen to see the best in everyone.