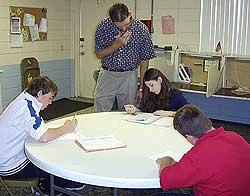 PINELLAS PARK – Deep in the heart of Pinellas Park, hidden among a few small farms, on a road where no one asks why the chickens crossed it, Marian Foulks had a dream.

Today Foulks lives her dream out daily, offering her services as a teacher at Grace Christian School, the school she helped create.

“It feels like I’ve done something worthwhile with my life,” she said, “because I’ve invested in people.”

With only six full-time staff and four committed volunteers, Grace Christian is associated with the Florida Association of Christian Schools and prides itself in giving pupils a faith-based education and a small, homey atmosphere.

However, religion isn’t the only thing offered.

“Not many schools have kindergarten through 12th (grade) with dual enrollment with St. Petersburg College,” said marketing director Tim Ferguson.

With more than 40 children enrolled this year, Ferguson said the school promotes hands-on learning through an accelerated program that “teaches responsibility at a very early age.”

Pupils have private work stations which they are free to decorate, and they study independently, at their own pace, in the single-room learning center. Faculty members monitor progress, grade tests and provide help and encouragement.

“People will come by and say ‘my kids will never be able to do it,'” Ferguson said. “Some of those kids have become our best students.”

A teacher at Grace Christian and the wife of Pastor Randy Weekley, she said some students complete two grade levels in one year, but stresses parents can be sure “teachers really care about (the children),” no matter how quickly they learn.

The Weekley’s 13-year-old daughter, Kayla Weekley, has never attended another school and said she is glad to have a close relationship with God, her parents and her classmates.

The average child has a GPA 90 percent or higher, and about half the children are on the honor roll. School staff will have a booth at Pride and the Park on March 18 with more information.

Foulks said she is proud of the progress the school has made and considers it a privilege to be able to teach the children of her former students.

“Even though they know me with all my strengths and failures,” she said, “it is a great compliment to know that they trust me with their greatest possession – their children.”

Although the private-school environment is very different, Emmons said he is much happier at Grace Christian and now sees a clearer path for his future.

“I’m going to finish up here and go to college and try to make a difference in my life – try to become something in the world,” he said.

Ferguson’s wife, Diane Ferguson, is another monitor at Grace Christian and the newest staff member, with 11 years of service.

She said developing the next generation is the main focus of the faculty. Children are not deprived of social interaction, but encouraged to take active roles in the world.

Many play on public sporting teams, such as soccer and softball.

Both husband and wife said the school’s location can make it hard to gain exposure, so interest has long been generated through word of mouth.

Tim Ferguson said half the problem is that “62nd (Avenue) is primarily used as a thru-road.”

That could soon change, as the farm across the street from Grace Christian has been sold, and construction for condos or upscale homes is forthcoming.

After 30 years, the chickens better look both ways.