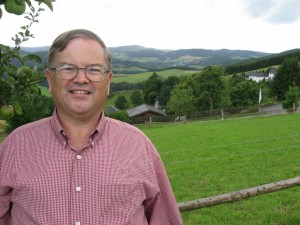 The following information currently appears on the CaringBridge site for Columbus Pastor David Plaster, who went to be with the Lord Saturday evening:

There will be a viewing on Wednesday, March 10, 2-4 and 6-8 p.m. at Redpath-Fruth Funeral Home, Warsaw, Indiana, and a memorial service at 6 p.m. on Friday in the Rodeheaver Auditorium  in Winona Lake, Indiana.  More details will be posted later.

In lieu of flowers the family has started a memorial fund in Dave’s honor. Gifts can be sent to the Dave Plaster Memorial Fund c/o GBIM, PO Box 80065 City of Industry, California 91716-8065

Dave Plaster was born in Akron, Ohio, November 6, 1949. He found Christ at the age of eight at the Grace Brethren Church of Canton, OH. He married his college sweetheart Ginny Crees, December 18, 1970.

After completing studies at the University of Lyon, France (1970) and Grace College (1971), he entered Grace Theological Seminary, Winona Lake, Indiana.  At that time he became the part-time pastor of Millwood Chapel in Etna Green, IN. After receiving a Masters of Divinity (1974) he and his wife Ginny moved to Armagh, PA where he began the Valley Grace Brethren Church.

Dave and Ginny have three grown children: Andy, the oldest (Warsaw, IN); Rachelle, and her husband Brandon Creighton (Warsaw, IN), and Rob and his wife Nichole (Paris, France). They have one granddaughter, Shelly Marie Creighton, who was the light of her Papa’s eyes, and a baby boy Creighton on the way. Dave’s mother, Jane Plaster, resides in his hometown of  Canton, OH.

Family will receive friends from 2-4 and 6-8 pm on Tuesday, March 9, 2010 at Schoedinger Worthington Chapel, 6699 N. High St., Worthington, Ohio.  A memorial service will be held at 6 pm on Saturday March 13, 2010 at Grace Brethren Church. In lieu of flowers the family has started a memorial fund in Dave’s honor. Gifts can be sent to the Dave Plaster Memorial Fund c/o GBIM, PO Box 80065 City of Industry, California 91716-8065 The family requests that all tributes be submitted to their website at www.caringbridge.org/visit/daveplaster.