Get to know two new Grace College staff that also just so happen to be siblings! 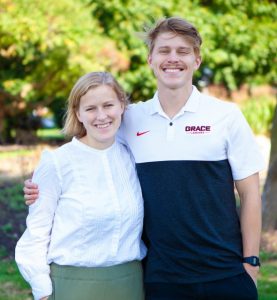 Siblings Karly and Jake Poyner grew up steps from the Grace College campus.

The Poyner’s front porch step is precisely 64 steps from the back entrance of the Gordon Health and Wellness Center. The Poyner siblings, Jake, Grace’s Head Men’s and Women’s Cross Country Coach, and Karly, instructor of the Communication Capstone course, grew up knowing Grace College and its students intimately. What most recently has been their workplace and source of higher education, was once their big backyard and playground. There are many stories to be told of this transition, but let’s leave that to them, shall we?

1.) What was it like growing up next to a college?

Jake: The Winona Lake community is so family-friendly. I have memories of being at Grace athletic events as a youngster and taking homeschool PE classes in the Gordon Rec Center (now the Gordon Health and Wellness Center). We also played endless hours of soccer on the field in front of Mount Memorial and the William Male Center. Looking back on it, I’m very grateful that the college community was such a safe and inviting one for young kids like myself to grow up in and have in our backyard.

Karly: It was nice to grow up next to a college because during the summer you had a large recreational area that was empty! I remember looking at the Grace students walking around McClain hall from behind the window in my fourth grade Jefferson Elementary school classroom. There were moments where I looked at the students and thought “huh, I wonder if I’ll ever make it to college and be smart.” (But I was probably thinking that during the week of long division in math.) In the Warsaw Public school system, we had quite a few Grace College student teachers. I started equating Grace to a teacher’s college and chose to pursue Elementary Education as the first major on my undergrad major list.

2.) Are there any mischievous things you did as a child relating to Grace?

Jake: One time my friends and I pressed a bunch of the buttons on the information poles around campus very late at night. Like a repeating ding-dong-and-ditch. We did get caught, and I’m not sure that Glenn Goldsmith on Campus Safety will be happy with me sharing this, but hopefully he forgives me! That was not one of my finer moments growing up in Winona Lake. Thankfully the coordination and planning got channeled into much less mischievous things later in my life.

Karly: My friends and I would videotape us dancing to music and create “music videos.” There was one time we dressed up, choreographed, and filmed our take on Shakira’s Waka Waka on the lake-facing side of Mount Memorial. I remember having to awkwardly stop and wait for Grace students to walk in and out of Mount Memorial so that they wouldn’t be in our shots.

3.) Did you ever think you would attend or work at Grace growing up?

Jake: I never thought I would work at Grace College. Up until my sophomore year, I didn’t have much of an idea with what I wanted to do out of college, but I was passionate about distance running, and I was passionate about teamwork. Personally, I had a more chaotic college experience: After visiting more schools than I probably needed to, going through a coaching change at Wake Forest, making the extremely tough decision to transfer after my sophomore year, and then spending three years in Nashville at Lipscomb University, I felt like I’d witnessed a lot of ups and downs of collegiate athletics. Thankfully, the Lord impressed upon my heart the desire to pursue coaching at this level going into my sophomore year. I always kind of hung onto that as I walked through my experiences as a collegiate athlete.

Karly: Once I was enrolled in the Jumpstart program during my senior year of high school, I realized I liked the size of the classes and the personal nature of the professor’s lectures and could see myself attending Grace. During my senior year of undergrad at Grace, several professors approached me about grad school options and they all communicated in some way or another that they could see me as a professor. Since all I had seen of professors up to that point, visualizing myself teaching at Grace became a point of motivation during the rough months of method courses at BSU.

4.) How did you get to be in your current roles at Grace?

Jake: Honestly, it was all orchestrated by the Lord. Last year, I came on staff as a graduate assistant. During my last year at Lipscomb I knew I wanted to get some coaching experience so I began looking for graduate assistant positions around the country. Coach Raymond reached out to me relatively late in the process (after a couple other doors had closed) about a brand new GA position they were looking to fill. I’d always been in contact with Coach Raymond over the years since my junior year in HS—often times, swinging by his office over numerous breaks to catch up. I have a framed letter in my office that he wrote to me in June 2012 after a disappointing end to my junior track season that absolutely changed my life in the perspective it gave me. I held onto those words throughout my senior year. I know he would’ve preferred for me to have competed at Grace, but it’s crazy as a coach how your impact can even be felt in positive ways by those whose paths go elsewhere. To reconnect to the community that raised and shaped me, to work alongside Coach Raymond, and to empower Grace College as much as I can in my field of work is so awesome.

Karly: I was hired to take over the class for Pat Loebs’ sabbatical and teaching abroad term. When I interviewed for the position, we discussed how my current involvement with several research projects allows me to help undergraduates at their research levels.

5.) What is your favorite part of your position, and why?

Jake: The best part of my day is being out there on the track or on the XC course with the student-athletes—who are facing challenges, growing and developing.I love watching them come closer together through it all. My hope is that I can be a safe mentor and friend in times of need for them. For me, it really comes down to finding student-athletes who are passionate about distance running, passionate about being involved in a community like Grace, and willing to work hard as they walk into both “artificial-struggles” (as we like to label endurance races) and real-life struggles—pursuing excellence not as much for themselves, but for the Lord, for their family, for their teammates, and for their college.

Karly: I love love love hearing my students’ ideas! The COMM department is about to lose some critical and deep thinkers! I enjoy getting to know the students and their personalities and seeing how their passions ignite their research topics. Another thing that is really unique and powerful is the opportunity for me to bring my faith into the classroom. When teaching at a state school, I work to keep my personal faith at an intrapersonal level unless a student reaches out to me. However, Grace is different. In the capstone class, the students and I often ponder what our research means to the building and fostering of communities and souls. Whatever theory the student chooses, we think together of how this theory can be used as a lens to see deeper truths of the human spirit and how we are created by God. – from grace.edu