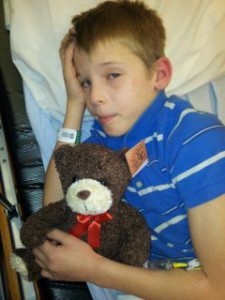 Prayers will be appreciated for Lyndan Edwards, second-oldest son of Canadian church planters Oliver and Cheryl Edwards, who are planting a Grace Brethren church in Medicine Hat, Alberta, Canada.

On his blog, at http://oliverinthehat.ca/, Edwards says, “Life just got placed on hold. Was gearing up for my first message in 2 weeks and then an odd thing happens. Our second oldest, Lyndan starts having this funny thing happen to his eye. Then he starts getting really dizzy.

“We take him into emergency and 4 hours +  an MRI later,  and we are told he has a brain tumour. 8 hours later it still seems like it’s all made up.

“1. A lot of people are praying for us right now.  Like a lot. And that is comforting. I pray that God uses this nasty thing to reawaken some people’s faith and draws people closer to Him even as they think about us.

“2.  God is getting our attention. I hate that it takes awful circumstances to do that, but it is this kind of time that brings into sharp focus what we really believe. And I know with certainty that God is with us. ‘draw close to Him and He will draw close to you, ‘ James wrote. We need Him more than ever.”