They had been traveling in South America and were scheduled to return to their home in Atlanta over the weekend when she was scheduled for an emergency appendectomy on Sunday. Below is a note that was posted on the Encompass World Partners website earlier today. 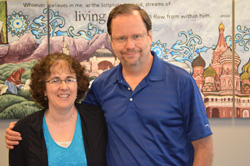 Sue is recovering nicely from her surgery. The surgery was a bit more complicated than originally anticipated as the appendix was beginning to burst as they began the surgery, but the doctor is pleased with her progress.

They hope that Sue will be released from the hospital today or tomorrow and they will then go to McCaman’s for the rest of the week until Sue is cleared for travel back to Atlanta, which they are hoping will be this Saturday.  Thank you for praying!