“We want to communicate through prayer, not prayer requests,” Jake Smith, a Grace College student and founder of the school’s campus-wide Prayer Initiative, said. “It’s not a time to tell each other what to pray for but a time for prayer.”

Smith began with a much smaller mission in mind. He desired to unite his dorm as a body of believers in a Wednesday night prayer meeting. He desired to see Godly men pray for those around them to come to Christ and to repent of the sins they struggled with. After meeting with dorm leadership to discuss his dorm-wide prayer meeting, they agreed. 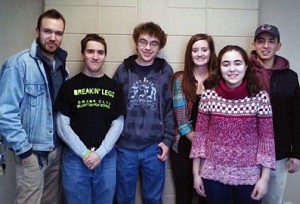 Over the course of time, Dr. Roger Peugh, who teaches the Practices and Principles of Prayer class, heard about Smith’s prayer meeting and met with him to talk about ways to get the campus involved. Within a few weeks, each dorm had a Wednesday night payer meeting.

With each dorm having large attendance rates, Smith created a weekly prayer initiative, Prayer in Action. The group quickly outgrew the large classroom in Mount Memorial where they met.

The group’s mission? Pray for revival on campus. Each week they united in prayer for unbelieving students to come to faith in Jesus Christ, repent and turn from their sins, and against Satan’s schemes against both themselves and Grace College as a whole.

During the fall semester of 2015, Ben Gruber began to lead the group, pictured at right. The mission continues to be the same; pray for revival on campus.

Gruber has also made it his mission to “see more people put an emphasis of praying into their lives.” As one participant, Amanda, stated, “I have seen God moving in my own life through the prayer meetings by reminding about the truth of who He is through the prayers of the students around me.”

Since the start of Prayer in Action meetings, at least 17 students have come to Christ, and one unnamed revival has begun.

Gruber now hosts the meetings every Monday in McClain 107 from 9:15-9:45 p.m. and on Wednesday at 11:15 a.m. Send Gruber a letter of encouragement at gruberbm@grace.edu — by Grace Beight

Editor’s Note: Grace Beight is an intern at GraceConnect. She is a senior at Grace College and is from Amherst, Ohio.