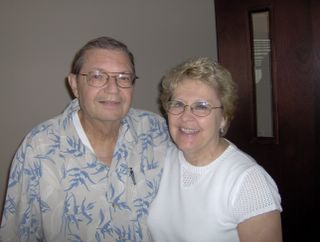 Grace Brethren have been faithful in prayer during the cancer battles of longtime Grace Brethren pastor Randy Poyner and his wife, Betty (pictured).

Betty says, “I know it is the prayers of many people that God has answered during these last few months even including Randy’s remission. His blood and urine tests last week were all great and showed evidence of continued remission. Thanks.”

But then she shares the following (reproduced here by permission) and asks for the further prayers of God’s people.

“This has been a difficult week to say the least.

“Last Thursday and Friday I had appointments with my oncologist and my surgeon. I told them I was feeling pressure in my pelvis and Dr. Buckley did a pretty thorough exam and said he was feeling something, but didn’t know if it was bowel or tumor.

“I had a CT Scan on Wednesday. Yesterday Dr. Warmuth’s nurse called and said that he wanted to see me today. Not a good sign.

“We went in today and he told us that the CT Scan revealed two areas of concern. One area is a metastatic tumor about two inches square. The other is an enlarged node. Dr. Buckley was off today, so they couldn’t discuss treatment, but it looks like surgery and chemo and/or radiation.

“All of my other abdominal organs were normal, so that is encouraging for me. I don’t look forward to the drill. It’s really ironic that tonight is the women’s banquet at our church. The theme is extraordinary women and I was asked to give my testimony as part of the program. Guess I’m still a little in shock, so think I’ll be able to hold it together. It’s been a long week to wait for results.

[In a later update, she reports, “The speaking went well. I think I was still a little in shock, but God gave me calmness through it. I have considered anointing and have asked our pastor for it tomorrow morning during the 8:45 service.”]

“Obviously whatever they do, it will be quick since this thing seems to grow very quickly. My CT Scan in February was negative.”