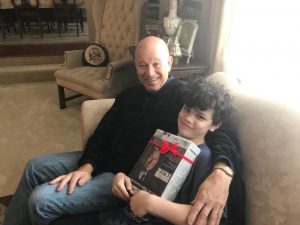 Prayer is requested for Aiden, the nine-year-old grandson of Dr. Bill and Debbie Katip. (Bill is the president of Grace College and Seminary.)

Aiden, the child of the Katip’s son, Michael, was in a house fire early Monday. He had no burns, but inhaled a significant amount of smoke causing his heart to stop for about 30 minutes. He is now in a coma.

It appears that Aiden, our 9 year old grandson, is in his final hours here on earth. He was so long without oxygen to his brain that the swelling is significant and the damage is catastrophic. They have to get his body temperature up to normal before they do the final tests. This will likely be a couple of days. Thanks for all your support and prayer. We know this was not a surprise to our Lord.

Aiden is currently being treated at Children’s Hospital in Pittsburgh