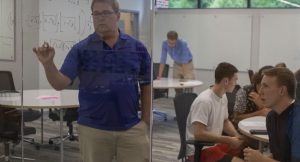 Dr. Kris Farwell, mathematics program director at Grace College, was elected the Indiana Chair of Mathematical Association of America (MAA), the world’s largest community of mathematicians, students, and enthusiasts. Farwell will serve as chair for a three-year term.

Farwell received his Ph.D. in mathematics from  Rensselaer Polytechnic Institute in Troy, N.Y. He has taught math at Grace for eight years and got involved with MAA early on in his career because he recognized its relevance for college mathematics. The mission of the MAA is to advance the understanding of mathematics and its impact on the world.

“It was an honor to find out I was nominated,” said Farwell.

One of his primary responsibilities as chair is to plan the semi-annual math conferences for Indiana. “The spring MAA Conference is a great platform for Grace students to compete in the Indiana Collegiate Mathematics Competition (ICMC). I look forward to being involved at a higher level in the coming years,” he said.

Farwell intends to take two teams from Grace College to compete in the ICMC this academic year.