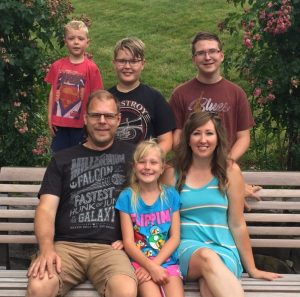 Tim and Heidi Hodge with their children: Abigail, Benaiah, Luke, and Noah.

“I deeply love our Charis Fellowship and feel that God has given me a passion to help propel our Fellowship forward in the days ahead,” said new Charis Fellowship Coordinator Tim Hodge. Over the past year Tim has been transitioning into the position as Tom Avey moves into retirement after 23 years faithfully serving in the role. (See related article here.)

Tim grew up in Adelaide, a city in southern Australia, where he came to know the Lord as his personal Savior at a young age. His father was actively involved in door-to-door evangelism, and Tim credits his parents’ example as a main factor in his early acceptance of Jesus.

“As a teenager I renewed the commitment and surrender of my life to Jesus and asked Him to use me however he wanted to, wherever that may be,” Tim recalled.

After high school Tim earned a Certificate in Mechanical Engineering at the General Motors plant in Australia, and he completed training as a tool maker and metal fabricator.

“During this time,” Tim said, “I further matured as a Christian, while also gaining understanding in what it is like to be a part of a secular work environment.” He spent time volunteering at his church and gaining ministry experience while saving up funds for ministry training.

Having visited friends in the U.S. as a young adult, he was open to pursuing ministry training here if God opened that door. He wrote letters to several Christian colleges requesting catalogues. None of the colleges sent what he asked for, except for one he never reached out to: Grace College and Theological Seminary in Winona Lake, Ind.

“I never wrote to them or had even heard of them, but somehow they got my info and sent exactly what I was looking for.”

Having felt God’s peace that this was where he should study, Tim moved to Indiana in August 1997, his first experience with the Midwest.

“Moving from one culture to another is always a big adventure. When I first arrived everybody just sounded American to me,” he recalled. “I actually didn’t pick up on the range of accents until after my first few weeks when I began to realize there were some significant differences!”

Adjusting to life in a new setting, Tim remembered feeling the less-obvious cultural differences with his first experience in the cafeteria. In Australia, schools generally don’t have cafeterias and lunch trays. “After several moments of awkwardness, I had to ask someone what I was supposed to do.”

Shoveling snow was another big adjustment Tim mentioned, as his home climate was similar to southern California.

Tim was first introduced to the Charis Fellowship through his professors at Grace and by attending Community Grace Brethren Church in nearby Warsaw, Ind. In his junior year, he met his future wife, Heidi, who is the daughter of Pastor Larry Humberd and the late Joyce Humberd, from Lehigh Valley Grace Church in Bethlehem, Pa. Heidi attended Grace College for one year before moving back to Pennsylvania to attend nursing school. The two maintained a long-distance relationship until he finished his studies in Winona Lake. The couple married in December 2001, and God has blessed them with four children: Noah (16), Luke (14), Abigail (10), and Benaiah (7).

Tim worked at Lehigh Valley Grace Brethren Church for two years as an associate pastor, specifically working with youth and young adults. In 2004 God opened an opportunity with Grace Family Church in New Holland, Pa., where he served as youth and young adult pastor during a challenging ministry season. After two years, and also serving as an interim pastor, Tim was asked to assume the position of the lead pastor. He continued in that role for the next 15 years, guiding the church to a position of greater health and vibrancy.

In November 2020 Tim accepted the position of Fellowship Coordinator.

A statement provided by the Fellowship explains the role: “The Fellowship Coordinator provides leadership and administrative excellence to the Fellowship Office for the purpose of sustaining a culture of gospel movement through celebration, collaboration, catalyzation, and commemoration; working together with interdependent local churches, national ministries, and cooperating organizations that are passionate for biblical truth, biblical relationships, and biblical mission.”

The position is a full-time employee of the Fellowship. It was created in 1998, and Tom Avey was the first to fill that role. Tim will be the second person to serve the Fellowship in this capacity. This role differs from the Executive Director (formerly called Moderator), who serves for an elected term in a part-time capacity while remaining a pastor at his home church.

As a college student Tim wrote a paper on triune immersion baptism. Jim Custer, now senior pastor emeritus at Grace Polaris Church in Westerville, Ohio (Mike Yoder, lead pastor), encouraged CE National, now known as Momentum Ministry Partners, to publish it as a book, Could it be Three. A follow-up book on baptism, Dividing Waters, was also published, and Tim has written and contributed to several other printed materials used by the Charis Fellowship.

Although he did not grow up in a Charis Fellowship church, Tim said he “quickly came to love and embrace the family that I found it to be.” His first experience with three-fold communion was as a college student at the Warsaw church, and he was later baptized by triune immersion as a seminary student by one of his mentors, Dr. David Plaster.

“The investment that various Charis Fellowship leaders made in my life during college and seminary had a profound impact and helped me grow further in my understanding and appreciation of our tribe,” Tim said. He has also become a “passionate student of Grace Brethren history amassing a notable historical collection.”

When it comes to his new role, Tim shared that the Fellowship Office is tasked with helping continually create and sustain a culture of movement within the Charis Fellowship. Part of Tim’s vision is to “find ways to do what we’ve been doing even better and more effectively, to work hard at fostering interdependence, and to explore the best ways to communicate effectively in our current day and age.” He also wants to “provide additional levels of clarity on who we are, how we operate, what we’re doing, and where we’re heading” so that everyone can have a better understanding of what a blessing it is to be part of the Charis Fellowship.

When Tim offered his life in service to God as a teenager more than three decades ago, he had no idea that God would call him to the other side of the world to serve Him. But Tim willingly and faithfully followed God’s leading in his life to leave his home country, pursue ministry training at a school he had never heard of, and settle in Pennsylvania to serve local churches and to eventually help lead a national network of churches.

“Throughout all those life events,” Tim said, “my relationship with Jesus has been the constant focus, the source of strength and wisdom, and the priority through which both personal and ministry decisions are made. Although I know it will be incredibly challenging, I am excited for the future and what God will continue to do to impact the world for Jesus through the collaborative ministry of the Charis Fellowship in the coming days.” – By Randi Walle