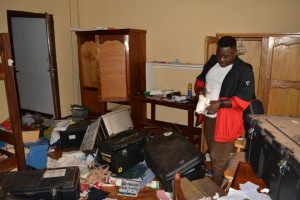 Alexandre, an ICDI staff member, takes stock of what is left after looting at ICDI offices in the Central African Republic. (ICDI photo)

The upheaval in the Central African Republic (CAR), home to several ministries with Grace Brethren connections, continues to make life interesting for those on the ground.

Jim Hocking, founder and executive director of ICDI (Integrated Community Development International), reports that things are not calm, as evidenced by this report on the GlobalPost site. It reports that Central Africans are protesting against the new regime.

Jim was interviewed this week on the radio program, Mission Network News, regarding the situation in the CAR. Click here to listen to the broadcast.

Mike Taylor, Encompass World Partners staff member and founder of Three Strands, a medical mission to the CAR, was scheduled to travel to the country next week with his brother, Pastor Steve Taylor, of Grace Church in Aiken, S.C.. This morning, Mike reports their trip has been postponed. “There was some escalation in violence last evening and church leaders felt better to wait a bit,” he said.

Their mission next week was to quietly hold some medical clinics; meet with those impacted by the violence and PTSD (post traumatic stress disorder); encourage mission staff, students, orphans, pastors, and our Fulani friends; and help where needed. Instead, he asks for prayer (and a praise):

Yesterday, Janet Varner, a missionary with Encompass World Partners, reported (on the Encompass page) seeing kindness in the midst of the strife:

Amidst the military trucks and other traffic Janet Varner (Encompass staff Bangui) sees going by  her office window, “a young man was just pushing a two wheeled cart up the street loaded with logs at least 4 meters long to be chopped and sold for firewood.  There were really way more logs than I’d judge the cart could bear, but he was doing okay, pushing with all his might until he hit a big pot hole and was stopped dead.  A man walking down the other side of the road, dressed in nice clothes, just came across and started pushing with him till he got it going again and went on his way!  It didn’t seem like they even knew each other.  I’m glad I saw it because sometimes when so many mean things are happening it’s easy to forget the kindness that is just such a common part of people’s lives here.

“Here in the city, in some neighborhoods looting continues. The national radio reported today that microscopes, computers, vaccines and disease cultures had been looted from the national laboratory just up the hill from us. Yesterday we heard that the Doctors Without Borders hospital (previously our mission hospital at Boguila) had been looted and all its funds stolen by rebels.

“Shooting is getting less and less which is good. We’re told that lots of guns have been collected. It might be more helpful if the ammunition had run out too since we also hear that many guns have been hidden but even this is better than earlier.  Some banks have opened but are only giving very limited amounts to any one customer.  The group of 97 who will be the ones to select the interim (18 month) president is still being chosen.  Apparently they are still collecting applications and resumés from people who want to be part of this selecting group.  They also need to choose the leader of the National Assembly.”