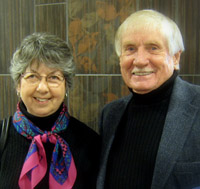 She wasn’t the kind of girl one would single out to train for leadership. Quiet and shy, she was content to teach a Bible story to an imaginary Sunday School class, using her mother’s flannel-graph figures. She didn’t look like a leader who would direct a national organization into a new era. But as Janet Minnix retires August 1 after 17 years as president of Women of Grace USA, the national women’s ministry of the Fellowship of Grace Brethren Churches, she leaves behind a thriving organization that is changing the lives of women across the nation and around the world.

So what transformed a quiet, timid woman into someone of great influence and public ministry? Janet says it started gradually. Her father, Tom Hammers, was a pastor and church planter, and she learned early on to help transform their house each week into a “church,” with their living room as the sanctuary and the bedrooms as classrooms. Her mother, the former Mary Ashman, came from a family that was known as pastors and leaders in Brethren churches.

While a student at Grace College, Janet was involved in various music teams, which gave her experience in front of an audience. After graduation, she moved to Roanoke, Va., to teach. It was there she met her husband, Odell, an air traffic controller. She credits him for being a great supporter and encourager of her ministry. They have two sons, and their three grandchildren live just up the street from them, “close enough to make a run for ice cream together.”

Shortly after marrying Odell, Janet was invited to a meeting of what was then called Women’s Missionary Council (WMC), the predecessor to Women of Grace USA. Over the years Janet served WMC in various ways, eventually serving as national program chairman for 12 years. When she was asked to let her name be placed in nomination for president, she refused, content to serve in the background. The request came again, and she continued to say “no” for a year and a half. Then one Sunday her pastor preached on Jesus’ prayer in the Garden of Gethsemane and His conclusion, “Not my will, but yours be done.” She knew then that she had to say “yes.”

“God has used several difficult situations in my life to move me to greater dependence on Him, but accepting the presidency was a turning point,” Janet shares. “I knew I was called by God to this office, but was faced with my helplessness and inadequacy for the job. I know I’m not capable of being His instrument apart from His wisdom and power.”

A Calling from God

She took the position expecting to fulfill her three-year term and then hand the responsibilities over to someone else. “We tried to find someone to run as president-elect, but couldn’t find anyone who had the vision and was willing. One day it occurred to me that it was no longer about finding a name to fill a slot  on a ballot. It had to be viewed as a ministry calling from God. Then I had total peace that we couldn’t find someone else for leadership. God had called me to this ministry, and He would provide the right person at the right time. I would know it, and the person would know it.”

Janet ended up leading Women of Grace for 17 years. Her guiding principle is that it’s God’s ministry, not hers. She explains, “He called me to it, but it’s not mine—it’s His. I need to keep open hands, rather than feeling possessive and trying to manipulate it my way. That’s backed up by a lot of prayer.”

“We have changed the perception of ourselves from being the stay-at-home moms who did their work from their kitchen table,” Janet observes. “We have gone from being a women’s mission organization only to being a women’s organization that, while retaining the core value of missions, has a broader vision of how we can minister to women. We know that an interest in missions will grow as women are firmly grounded in the Word of God.”

Janet often led changes that were not guaranteed to work and that sometimes were unpopular. For example, the presidents of regional districts used to meet before National Conference. As the conference format began to be more focused on pastors than on lay people, the women leaders were less motivated to come. The idea developed of hosting an annual leadership training Summit. Although the concept of each district having a president has been fading, the popularity of the Women’s Leadership Summits has continued to grow.

Other aspects of the ministry are also flourishing. For Janet, a tipping point was the response to the first Women’s Spectrum magazine. “I felt this was something that would have an impact beyond the confines of the Women of Grace groups—a tool we would be able to use to influence women in all the churches in the Fellowship,” she shares.

The magazine has grown and now offers opportunities for women to use their writing and editorial skills. The twice-a- year printed newsletter has become a monthly e-newsletter that provides inspirational articles as well as information on what is happening in Women of Grace.

Janet was instrumental forging a partnership between Women of Grace and Grace Theological Seminary in offering a series of weekend classes in various regions toward a certificate in Women’s Leadership Studies. The demand has grown so that there is now a need to develop more instructors for the classes. Spanish language ministries are developing for women in Hispanic churches and there is an interest in offering training in French or Creole for the women in the Haitian churches in Florida.

“I am strengthened by the fact that we have a team. Yes, a  team needs a leader, but everyone has equal say, and no one person has control,” Janet says. “Every decision has to be made by the team, and even the team leaders don’t bear the whole burden. This has been a comfort to me. I’ve appreciated the godly mindset of the women on the team and that prayer is the primary core value that’s worked out.”

Board members are grateful that she initiated a “stop-and-pray” rule. Any time someone on the board feels uncomfortable or overwhelmed by the direction a discussion is going, she can call for a stop-and-pray. It has contributed greatly to the unity of the board and a conviction that decisions are being made with the clear leading of God’s Spirit.

“What I have learned from Janet is graciousness.” Cindy Bushen, Women of Grace treasurer, shares. “She carries a quiet, godly grace about her yet, when put to the task, is bold about her convictions. She has shown me that there is no aging in Christ. She is young at heart and cares about the young. There is no room for hanging on to ‘the way things were’ when Christ is directing us to move on.”

“Janet has a discerning way of using the strengths of each woman so that the board functions efficiently with creativity and loads of energy,” adds Sharon MacMillan, the board’s director of spiritual life. “We are motivated to be diligent and yet dependent on the Lord. The spiritual lessons that have been gently taught by example have been treasures that I take with me to other places of ministry.

“I will never forget attending a chapel service at Grace College with Janet after one of our meetings more than ten years ago. The speaker led us to a personal time of vision casting. Since that time I have observed that God has exceeded any dreams that Janet may have had. He has done great works in a woman who has given her heart and soul to God’s ministry, and many women will never be the same.”

In addition to her leadership of Women of Grace, Janet has also served in the women’s ministry in her church, Ghent Grace Brethren. She also serves as Missions Commission chairman and worship team pianist. She has also led girls’ discipleship groups through SMM (Sisters Mentoring with a Mission) and has been on ministry teams to Urban Hope, Germany, and the Central African Republic. She also serves on the Board of Trustees of Grace College and Seminary.

Two passages have been sources of great comfort and encouragement to Janet as she has led:

“So do not fear, for I am with you; do not be dismayed, for I am your God. I will strengthen you and help you; I will uphold you with my righteous right hand.” Isaiah 41:10

“May the God of peace, who through the blood of the eternal covenant brought back from the dead our Lord Jesus, that great Shepherd of the sheep, equip you with everything good for doing his will, and may he work in us what is pleasing to him, through Jesus Christ, to whom be glory for ever and ever. Amen.” Hebrews 13:20-2 (emphasis Janet’s)

When asked what she considers her greatest accomplishment, she laughs. “It’s really God’s accomplishment—that He can take a shy introvert without leadership training or skill leading an organization and use [her] as He wants to. He took someone who felt incompetent and inadequate and taught her to put that in the Lord’s hands and let Him guide. The role of leadership [not only] put me in a position to depend on the Lord but also developed a self-confidence I never had, because the Lord gave it to me.”

Editor’s Note: Viki Rife is the director-elect for Women of Grace USA, where she has served as the Communications Coordinator and Director of Girls’ Ministries. This summer, she will succeed Janet Minnix when Janet retires from leadership.

This article first appeared in the Summer 2014 issue of GraceConnect. If you’d like to receive the magazine, mailed directly to your home at no charge, click here.