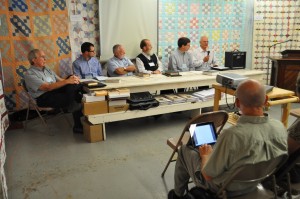 Jim Custer, left, from Grace Polaris, a Grace Brethren church in Columbus, Ohio, was part of a panel on the Bible and Spirituality in the Brethren movement.

Last week’s Brethren World Assembly focused on Spirituality among the groups that trace their spiritual heritage to Alexander Mack and the baptism of eight believers in Schwarzenau, Germany. Those in attendance celebrated their commonalities, while recognizing that many times they disagree on other issues. The Brethren Newsline, which is produced by the Church of the Brethren and Cheryl Brumbaugh-Cayford, captured some of the best “quotable quotes” from the weekend. Some are reproduced here. Click here to read the complete collection.

“Community was not casual or haphazard but intentional.”
— Jared Burkholder of the Fellowship of Grace Brethren Churches, associate professor of History at Grace College in Winona Lake, Ind. He spoke on “Community, Family, and Individual in Brethren Spirituality.”

“We live in perhaps the most crucial age of history since the crucifixion and resurrection of Jesus…. Our job is enormous. This is not a time to twiddle our thumbs. This is a time to pray.”
— Roger Peugh, a longtime missionary in Germany now teaching missions at Grace College and Seminary, a school of the Fellowship of Grace Brethren Church. He preached on the importance of prayer for the Thursday evening worship service.

“Brethren have been spiritual people even if they have been slow to write about spiritual practices.”
— Jeff Bach, director of the Young Center for Anabaptist and Pietist Studies at Elizabethtown (Pa.) College.

“What a time it will be when all of God’s children sit down to supper.”
— Keith Bailey of the Dunkard Brethren, explaining how his community spends significant time in spiritual preparation for and carrying out the love feast, feetwashing, and communion.

“I remember at the end of one of these gatherings a ballot was taken and the Fellowship of Grace Brethren was noted the least Brethren. We’ve earned that.”
— Jim Custer of the Fellowship of Grace Brethren Churches, speaking about the traditional ordinances and how some in his community have moved away from them in favor of an emphasis on evangelism and world missions.