Raising Awareness of Children in Uganda 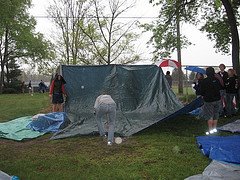 Crystal Ludwig, a Grace College journalism major who is serving this semester as an editorial intern with FGBC World and the Brethren Missionary Herald Co., wrote the following (this version is slightly edited) on her personal blog this past Sunday:

Last night, I was one of 300 people who walked the streets of South Bend, Indiana, and slept in an expanse of grass next to a road beside the campus of Bethel College.

It was 40-some degrees and it rained all night. We brought tarps, one side of which we attached to the top of a chain-link fence, the opposite side of which we held down with rocks, logs, trash cans, and other weighty objects, creating a makeshift tent, or “shanty,” as some preferred to call it.

We spread more tarps on the muddy grass underneath, laid down our sleeping bags, and became close friends very quickly. In my region, we must have crammed at least 30 people under three or four tarps. My roommate and I brought only one sleeping bag and one small blanket; we unzipped the sleeping bag, laid on it, and attempted to share the blanket.

We shivered through seven hours of countless readjustings of the blanket and retuckings of the feet until approximately 6:30 a.m., at which time we dragged ourselves into our big blue bus and returned to our snug campus.

We did this for the Invisible Children

Most of the children live in the bush with their families in places where it is very easy for the rebels to capture them. Every night they walk into town and sleep in the verandas of the hotel, the hospital, and the bus park, cramming in tighter than we ever did in our shanty. It is estimated that the town hosts 15,000 children every night.

To alert our country to this crisis, which has been called one of the worst facing our world today, 50,000 people across the nation slept in the street on Saturday, April 29 for the Global Night Commute. We walked through the town, created art projects that will be compiled into one massive coffee table book whose proceeds will benefit the Ugandans, and wrote letters to President Bush and our senators asking them to give assistance to Uganda.

I won’t soon forget the smell of hair, sleeping bags, and sweatshirts that have been damp for a very, very long time. Nor what it means to be close to people. Nor what it feels like to finally be warm again.

It will, I’m afraid, be easy to forget the Ugandan children. It was a night to raise awareness; all we did was get funny looks and lots of car honks. And that’s okay. We cannot measure the results of what we did, and therefore to us number-hungry Americans, it may feel like we’ve done nothing.

Religion that God our Father accepts as pure and faultless is this: to look after orphans and widows in their distress… (James 1:27)&nbsp;