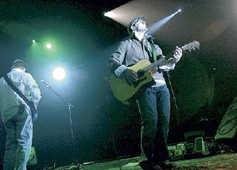 Most rock ‘n’ roll bands play at local clubs or bars. Band of Brothers has a more exotic venue: Kyrgyzstan.

This group of six musicians will play Rolling Stones, Thin Lizzy and U2 for residents of the former Soviet republic while spreading the message of Jesus.

The idea is to raise awareness of a new church in the Central Asian country by appealing to the many teens and young adults who crave Western music.

“This kind of youthful approach to our faith is part of who we are,” said Brian Blackmore of Cary, who plays bass guitar for the group. Other members include Mark Martyak and Jon Pritchett on guitars and Garold Smith on drums. Group members range in age from 25 to 47, and while most are not full-time musicians, nothing about their riffs is lightweight.

For most of the group’s members, the May 2-16 engagement at venues across Kyrgyzstan, including the capital Bishkek, will be their second. They went last year and performed free concerts in theaters, community centers and soccer fields.

At each event, they brought down the house playing such hits as Bryan Adams’ “(Everything I Do), I Do It For You,” and U2’s “With or Without You.”

At the end of the shows, they plugged the church, which was started by missionaries from Grace Brethren International Missions, an agency that Hope Community Church of Raleigh helps support. For security reasons, they don’t want to say exactly where the church is.

Kyrgyzstan, a mostly Muslim country the size of South Dakota, declared its independence from the Soviet Union in 1991. Since then, the country has been experimenting with democracy. But it has extensive social and economic problems, including high unemployment and alcoholism, substandard medical care and widespread poverty, the group said.

“It seems like the cities are defeated,” said Karl Moraski, the music minister at Hope Community Church, who went with the group last year and played keyboard.

Moraski, who lives in Cary, said the group visited a deserted park that had a rusty Ferris wheel, a symbol of bygone Soviet days. “It made me sad,” Moraski said.

Band of Brothers hopes to lighten the mood, change perceptions about what it means to be Christian and serve as an inspiration. Although Christianity is not new to Kyrgyzstan, Protestantism is. About 20 percent of the Kyrgyz people are Orthodox Christians — a more structured, highly ritualized faith.

“I love the idea that we have an opportunity to go to the other side of the planet and play a positive role,” said Jason Gore, 27, the college pastor at Hope.

Although much of the infrastructure in the country is in shambles, evident in shoddy roads and services, Gore said he was stunned by the beauty of the landscape, including snow-capped mountains and rolling hills of bright green grass.

Band members say they’re not there to “Westernize” the Kyrgyz people or to impose their music on them. Still, there’s a huge fascination with Western music and movies. The band found that even old standards such as “Yesterday” by the Beatles or “I Can’t Get No Satisfaction” by the Stones drew wild applause.

Moraski, who sports a T-shirt with the band name — the backside reads, “We’re big in Kyrgyzstan” — said being in a foreign country allowed him to experience worship in a new way.

“For most people, the understanding of what it means to worship God is a Sunday morning,” Moraski said. Over in Kyrgyzstan, he found himself feeling worshipful watching a sunset or smelling a bed of flowers.

“I felt like this is how it was when the disciples were working with Jesus,” he added. “You were enveloped in a whole new world.”