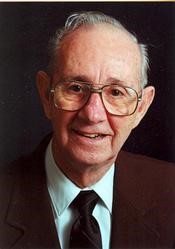 Ralph was a graduate of Frankford High School in Philadelphia, after which he attended and graduated from Grace College & Seminary in Winona Lake, Indiana, as well as the Bible Institute of Pennsylvania.

His funeral service will be conducted later in the evening on Monday, April 23, 2012 at 7:00 p.m. at Winona Lake Grace Brethren Church, 1200 Kings Highway, Winona Lake, Indiana, and officiated by Pastor Bruce Barlow and Pastor Glenn Byers.