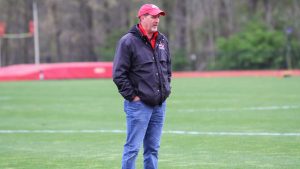 Raymond will be assuming the role of compliance administrator for the Warriors. He is no stranger to Westmont, however, after working as the school’s first full-time sports information director from 1997-2004.

“It’s been an amazing experience for me and my family to be part of the Grace community for the past 11 years. I’m extremely grateful to Chad Briscoe and Dr. Katip for giving me the opportunity to be here and play a role in Lancer athletics,” Raymond said. “Sometimes the Lord opens doors at unexpected times, and that’s the situation with my new position at Westmont. I was presented with an opportunity, and several things quickly fell into place to make it a reality. I’m excited about this new venture but will carry with me many friendships and great memories from my time at Grace.”

At the NAIA level, Lancer athletes earned All-American status 11 times to go along with 68 NAIA qualifiers.

The record books underwent a complete revision over the past decade. Since Raymond’s arrival, Grace has broken nearly every indoor track record and over 30 of the outdoor records.

“We are thankful for Jeff’s service and investment at Grace College over the last decade. He has left a lasting legacy within our athletic department, and we wish Deborah and Jeff nothing but the best during their transition to Westmont. He will be missed, but we are excited for his next chapter,” said Grace Director of Athletics Chad Briscoe.