The Grace College GOAL (Grace Opportunities for Adult Learners) is featured as the online news site, InkFreeNews, tells the story of Gracie Perez, who achieved her educational goal through the GOAL program. A portion of that story appears below. Click here to read the complete article.

Grace For Gracie – God Never Runs Out Of Grace 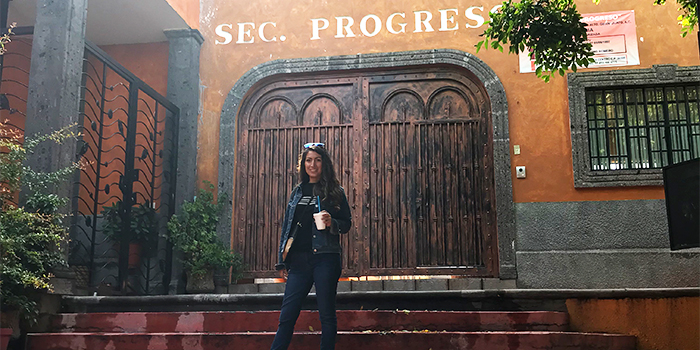 Gracie Perez visits her former high school in Mexico, Sec. Progreso, as an adult and poses on the front steps.

When Gracie Perez moved to Texas at age 15, she didn’t know any English outside of the words “yes” and “no.” Stepping into a new school, a new language, and a new country all at once felt like a mountain too big for a teenager to climb. At her Catholic high school in Mexico, she had proven to be a hard worker and hoped to become a nurse in the future. Now, just finishing high school seemed like an impossible feat.

Two years later, Gracie graduated and the next mountain stood before her. How would she go to college? She had no clue how the process worked or where to even start. No one was there to mentor her along the way. Unlike many of her classmates, she didn’t have a parent who graduated from college to ease her mind and show her the ropes. Putting a cork in her dreams, Gracie applied to work at a local restaurant.

Eventually, Gracie got married, started having kids, and moved to Warsaw, Indiana. She got a job at Lake City Bank where she worked as a Branch Manager for nine years. Gracie enjoyed working with her clients and getting to hear about their lives, but she remembers a trying time period at work where she opened accounts for graduate after graduate. It felt like an endless stream of young 20-somethings who had just graduated from college and landed their dream jobs.

Gracie remembers thinking, “These young people are advancing in their lives and their careers, and here I still haven’t taken any steps toward my dream.” In response, Gracie channeled the same gumption and tenacity that helped her finish high school and purposed to climb the next mountain before her: going to college as a full-time employee, full-time mom, and full-time wife.

This time, Gracie had a specific plan in mind; “GOAL at Grace College was my Goal,” stated Gracie.