Ready for Anything: Larry and Sylvia Totzke 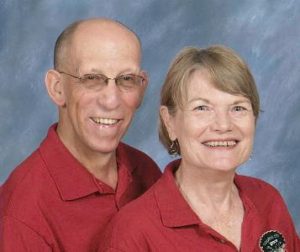 When church planters Larry and Sylvia Totzke (pictured at right) first settled into to their new home in Portland, Oregon, they decided to reach out to their neighbors by inviting everyone in their 323-unit apartment building to a Bible study.

Although technically retired, the couple has a rich history as church planters and facilitators. The two had already come out of retirement once to help plant Capital City Grace in Columbus, Ohio (Eric Miller, lead pastor). Larry was the founding pastor. Before that, they were heavily involved in Encompass World Partners and East Side Grace Brethren Church in Blacklick, Ohio (Chip Heim, senior pastor), where Sylvia served as missions director from 1989-2000.

“One of the things I’ve learned about myself over the years is that I love to start things and get them up and running and then turn them over to somebody,” Larry notes.

“In 2000, a couple years before I was scheduled to retire from the Department of Defense as a civilian, we thought that we might become missionaries.”

The couple looked into the possibility of international missions, but instead ended up moving to the Short North District, an arts district north of downtown Columbus, to help a house church movement get started there, and later to help found Capital City Grace.

“We realized that unless we could share the Gospel in our own city and have some sort of an impact there, we probably wouldn’t be able to do it in some new location somewhere around the world,” said Sylvia.

The couple decided to try their second shot at retirement in 2015 and chose Portland for its close-knit neighborhoods, diverse population, and proximity to family.

“Our time in Columbus seemed to be up,” Sylvia notes. “Larry and Eric Miller had been co-pastors at Capital City Grace; and the year before we made the move, Larry turned the church over to Eric. [He] was doing a good job. We just felt that our time was finished.”

Settling into their new hometown, the Totzke’s got to work making connections. Drawing on his years of experience working in human resources, Larry didn’t shy away from the bold request to their new neighbors to join them for a Bible study. However, no one responded to their email invitation. Undeterred, the Totzke’s tried a different approach.

“In the Pacific Northwest it’s become abundantly clear that there’s a major, major earthquake going to come in the next 50 years,” he says.  “And it’s going to be bad…All over the Northwest, cities and communities are trying to prepare themselves for how to survive this kind of a disaster.”

So Larry became involved in the neighborhood disaster preparedness committee. Each building needed to be informed and mobilized to prepare for the earthquake, so they put out another email to their neighbors, inviting people to a disaster preparedness meeting. This time, more than 25 people showed up.

“They were very enthusiastic about getting involved,” Larry notes.

Larry’s role of co-chair of the South Waterfront Emergency Preparedness Committee and the leading of another group in their apartment building puts the Totzke’s in a perfect role to network and build strong connections within the community. While not sure he wants to pastor another church, Larry and his wife are positioned perfectly to continue doing what they have always done best: to be catalysts between members of their community and a gospel-centered church.

[Connect:]
Click here to send a note of encouragement to the Totzke family.