Hurricanes are powerful, but they’re no match for the love of Christ in action.

The original plan was for the team from Ashland Grace to partner with Penn Valley, but God had other plans. Some of Willow Valley’s projects fell through, so they joined forces with groups from Penn Valley and Ashland Grace. Together, they made a team of 26 people. 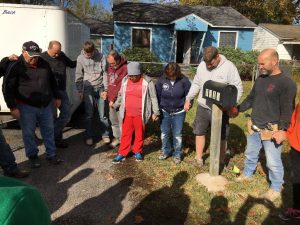 “It was really a joy that the three Grace churches could work together as one team,” Smith says. “We were able to accomplish more.”

They worked on two main projects: drywall and electrical. Since the homes were so damaged, it was the perfect time to improve them.

In one community, the water rose to four-and-a-half feet. Between tiling and drywalling, the team impacted 10 different homes in just a week. They also installed a few kitchens, including the tiling, cabinets, and sinks.

There was one couple, Larry and Nadine, whose kitchen was unable to be completed as planned.

“I told them to pray that God would provide, and that if I ever return and the kitchen isn’t taken care of already, I’ll make sure I get it done,” says Smith.

That evening, the team’s return flight was cancelled. Smith saw this was God’s way of providing for Larry and Nadine.

“I turned to the group and said, ‘We’re going tomorrow morning to install their kitchen.’ When Larry and Nadine realized the cabinets were going to be put in,” says Smith, “you could just see the tears running down their faces as they realized God had answered their prayers. What a joy that was to bless them that way.”

Some homeowners stuck around to help while their homes were being fixed. Mr. Percy, an 82-year-old man who lived in his home for 40 years, was particularly impacted by Smith. The team spent three days working for him. At first, Mr. Percy seemed thankful but apprehensive, but as time went by, his attitude changed.

“He became very appreciative and talked with us a lot more,” Smith shares. “Near the end of our time, I was praying, ‘Lord, give me an opportunity to share Christ’s love with him.’ When we were working together, Mr. Percy just kind of stopped and asked me, ‘Who sent you guys here?’” 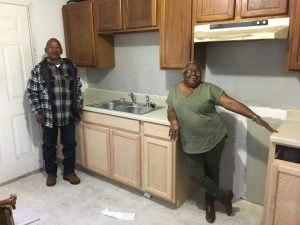 Smith saw this as the perfect opportunity to proclaim the love he was looking to share.

Smith went on to share with Mr. Percy about loving one’s neighbor from Matthew 22.

“I told him, ‘Mr. Percy, all the way from Ohio and Pennsylvania, you are our neighbor.’ I wrote that verse on his drywall,” says Smith, “and asked him if he had a Bible, which he did. The next day I saw him and asked if he’d read that. He had.”

Smith is planning to go to Houston again in March as there is still much to be done, and he has made it his goal to spend more time sharing with Mr. Percy.

[Connect:]
Click here to send a note of encouragement to Kevin or for more info about any upcoming trips to Houston.