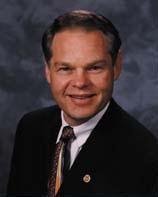 ALPHARETTA, Ga. (BP)–Robert E. Reccord, president of the North American Mission Board, announced his resignation April 17 from the Southern Baptist entity he has led since its creation nine years ago.

Speaking to nearly 200 NAMB staff members at NAMB’s Atlanta-area offices, Reccord said he made the decision, which was effective immediately, with “mixed emotions.”

“I am thankful for the countless numbers of people we have seen come to Christ and the thousands of churches we have seen planted and nurtured,” he said. “On the other hand, I regret we were not able to complete a number of things we have started or dreamed about. I regret that events of recent weeks have created an environment which makes it difficult to lead the organization and to stay on mission.”

The events Reccord referred to resulted from a lengthy article two months ago in The Christian Index, newsjournal of the Georgia Baptist Convention. The article, which was critical of the entity’s accomplishments and Reccord’s leadership, led to an investigation by NAMB’s board of trustees which also was critical of some of NAMB’s more innovative initiatives and decisions under Reccord’s leadership.

During his announcement, Reccord told employees he has found it increasingly difficult to be an entrepreneurial leader within a denominational structure.

Holcomb said, “Contrary to some opinions, Dr. Reccord is in no way being asked to resign, let alone forced to resign. He is taking this step for what he feels is best for Christ’s Kingdom…. I believe that this is one of the strongest evidences of his personal character and integrity.”

Reccord told employees he doesn’t know what he is going to do but has already received several calls asking him to consider various ministry opportunities.

“We will follow God’s leadership to do what is best for the Kingdom,” he said.

Holcomb announced that Reccord will serve as a liaison between NAMB and Promise Keepers as he speaks at 19 PK events across the country from June through October.

“NAMB and Promise Keepers entered into an agreement earlier this year to work together to mobilize workers for the rebuild that continues along the Gulf Coast following last year’s hurricanes,” Holcomb said. “I’m thankful that Dr. Reccord has the opportunity and the desire to challenge Christian men across America to invest their time and talents alongside Southern Baptists.”

Holcomb announced NAMB’s trustees will consider naming an interim president at its upcoming May 2 meeting as well as begin the search process for a new president.

In the meantime, Carlos Ferrer, NAMB’s chief financial officer, who was named the previous week as the interim chief operating officer, would assume all executive leadership responsibilities, Holcomb said.

“Carlos is a man of great giftedness and integrity, and he will provide outstanding leadership during this time.” Ferrer, a native of Cuba, joined the former Home Mission Board in 1992 as controller.