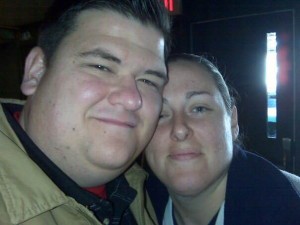 “When we started praying about moving to Ocala, that became the focus – the move to Ocala,” remembered Ryan Gagnon, who with his wife, Sarah, and their two children, left their long-time home in Sebring, Fla., to help with a Grace Brethren church re-plant in a community more than two hours away.

Ryan and Sarah thought it was about transplanting their lives and keeping their family intact. But once they settled into their new community, and began working at Grace Church (Todd McQueen, lead pastor), they realized they had missed the point.

Because he works full time, he has found there is little time between Grace Church, where he volunteers as assistant pastor, and the cellular phone store where he works as a sales representative. “[That] doesn’t afford a ton of time to go to the local concerts or coffee shops or interact with people socially,” he stressed, “so it became the people that I’m called to reach are the people that I work with.”

He said his seniority (he’s been with the company for 6½ years) provides some leadership credibility. Most of the other employees have worked there less than a year, because the store is in a “difficult” area. While he’s providing input into a work situation, he’s finding he can provide spiritual leadership as well.

Gagnon said that often Christians think they need to carve out time to be missional, but that in actuality, it’s in one’s “going.”

“It’s where God has placed you, it’s in your job,” he stressed.  “You don’t have to be the person that comes in and says ‘you’d better believe in Jesus.’ That’s not the point. The point is living with them relationally and then once they realize your character, they ask you the God questions,” he added. “Interacting with the public is important, but interacting with the ones that you’re actually living life with is more important.”