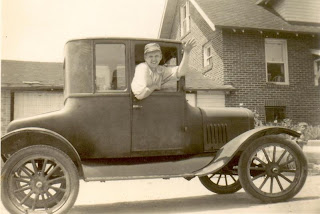 John Burtoft of Winona Lake, Indiana, is calling attention with this delightful photo to the 88th birthday this past week of his father, James Burtoft.

John Burtoft says, “My dad (Jim Burtoft) turns 88 years young this week. If you know him, you know what a truly great and giving man he is.

“The photo I have included is my favorite picture of him. I believe he was 20 years old at the time and is sitting in his first car which he purchased for $5.00. Every time I look at this photo I wish I could run up and hug him.”

The elder Burtoft is a longtime member of the Ellet Grace Brethren Church in Akron, Ohio (Jonathan Carey, pastor).