The May Eagle Commission newsletter reminds us of why we mark Memorial Day in the U.S. It’s a time to remember the many sacrifices individuals have made so that we may enjoy the freedoms we value. Especially poignant is the memory of Charis Fellowship Chaplain George Youstra (Col., U.S. Air Force) as he remembers Troy “Trojan” Gilbert. 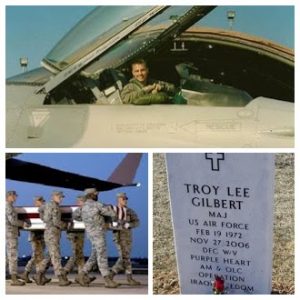 Troy “Trojan” Gilbert was my friend. He was my Christian brother. He took a young Air Force chaplain and put him under his wings and helped me become accepted by fighter pilots at Luke Air Force Base in Phoenix, AZ so I could fly in the F-16 and be a more effective chaplain to fighter pilots. Trojan was also a loving husband and father to five amazing children. On November 27, 2006, Trojan launched his F-16 out of Balad Air Base, Iraq in response to an Army Special Forces team that was in intense combat and in danger of being overwhelmed by insurgents. Because of the proximity of the insurgents to the Green Berets, “Trojan” had to make a dangerous gun run to fire at the bad guys without hitting the Americans. On his second run, Troy’s F-16 crashed into the Iraqi desert. His heroic actions saved American lives at the cost of his own. Troy is one of the many heroes that I have laid to rest across this great nation. On this Memorial Day, my thoughts will go to Ginger and the kids and I will remember that freedom is never free. I will give thanks to the Lord for my friend, Troy and the price he paid for my freedom.