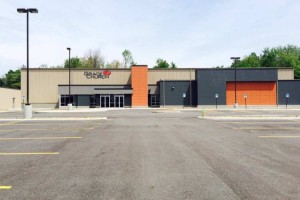 The Medina, Ohio, campus of Grace Church, a Grace Brethren congregation in Akron, Ohio (Jeff Bogue, senior pastor; Tony Livigni, Medina lead pastor) is featured on the website, Worship Facilities. An article and slide show discusses the use of an industrial facility for meeting space for the Medina campus. A portion of the story appears below. Click here to read the complete article and view slides of the Medina building.

Grace Church in the Akron, Ohio area is growing outward into their surrounding communities by opening multisite campuses. See how their Medina East location reworked a basic metal framed building into a newly renovated space equipped to serve the local community.

Grace Church, like so many other congregations who are multiplying their campuses, is one church currently located in four locations. Rev. Jeff Bogue, senior pastor at Grace Church has plans to plant 10 campuses in 10 years and 30 campuses in 30 years.Their Bath campus, now one of four Grace Church locations, has become the main campus for the church.

According to a recent article in the Ohio Beacon Journal, Bogue sees a definite advantage to meeting people in their own communities. “Instead of having mammoth buildings and mammoth auditoriums—not that we’re against that —we want to take the church to the community rather than asking the people to come to us,” said Bogue, “It’s actually the re-localization of the local church. We’re marrying the benefits of the megachurch—-the administration, the resources—with the benefits of a smaller, local congregation.”

The Medina East campus meets in a building that was originally built as an industrial facility. Services and classes were being held in half of the building that was renovated many years back. In Grace’s recent building project, this campus renovated the second half of the building, while putting on a long narrow addition that updates the front facade of the entire venue. The newly renovated wing includes a larger auditorium, a lobby space with a cafe, library and restrooms and a large classroom space for their student ministries. Opened to public in February of 2015, the new spaces are used for services and classes on Sunday mornings, in addition to hosting small group meetings and classes all throughout the week.

Click here to read the complete article and view slides of the Medina building.