Report from the Eagle Commission 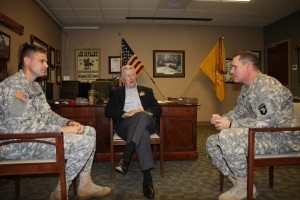 Larry Chamberlain, president and CEO of the Grace Brethren Investment Foundation (which sponsors the Eagle Commission) recently reported on a trip he and his wife, Sherlene, along with Endorsing Agent John Schumacher, and his wife, Martha, to Fort Campbell, Ky. They visited with three of Grace Brethren chaplains and their wives—Bill and Robin Graham, Pete and Monica Stone, and James and Ashley Murray. Fort Campbell is home of the 101st Airborne Division, a sprawling installation in eastern Kentucky/Tennessee that covers more than 106,000 acres and houses more than 30,000 soldiers.  “All three Chaplains are preparing to deploy with their units to Afghanistan this fall, so it was a timely visit for fellowship and encouragement,” he said.

Here’s some of his report, which was mailed to members of the Eagle Commission.

Bill Graham, promoted recently to Major, is a Brigade Chaplain and now supervises a number of other chaplains in the 101st Combat Aviation Brigade, including one of our newest Chaplains, James Murray, who was assigned to Bill’s unit.

Pictured are several of Bill Graham’s chaplains and chaplain assistants. Bill is fourth from the right. James Murray is third from the right. A proud endorsing agent, John Schumacher, is on the far right, with memories of flying many hours in a Huey helicopter, pictured, during his two tours in Viet Nam.

Pete Stone is assigned to the famous 1/187 Infantry Battalion, called the “Rakasans.” This unit did an airborne drop in Japan during WWII and “Rakasan” is Japanese for “falling umbrellas.” We were able to visit with Pete’s company commander and supervising chaplain and everyone speaks very highly of Pete’s ministry among his fellow soldiers in the 1/187.  His “ministry of presence” is highly effective.

James Murray is one of our newest chaplains, having served as a Chaplain Candidate and with the Reserves before being picked up for Active Duty. As a Chaplain Candidate, he graduated from Jump School number one in his class, so he is much at home in the 101st Airborne Division. His jump badge creates an instant connection with his soldiers.

Leave a Reply to Marlin and Judi Rose Cancel reply