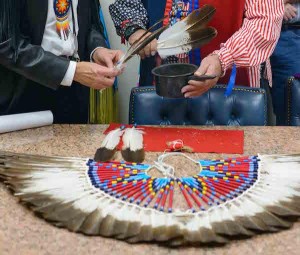 The online news site, Indian Country Today, reports on a recent Wall Street Journal article in support of Grace Brethren pastor, Robert Soto, and his legal battle to secure the return of Eagle feathers used in a Native American ceremony. A portion of the article appears below. Click here for the complete story.

Wall Street Journal Comes Down on the Side of Eagle Feathers

After the federal government returned ceremonial eagle feathers earlier this month to pastor Robert Soto in the wake of a nine-year legal battle, the episode received scant media attention.

But the incident caught the eye of the editorial board of The Wall Street Journal, which saw fit to run an editorial on the absurdity of persecuting and prosecuting the longstanding spiritual practices of this member of the Lipan Apache Tribe of Texas and leader of the McAllen Grace Brethren Church.

“In the annals of government abuse, the federal ‘Operation Powwow’ is one for the ages,” states an editorial from the March 12 edition of The Wall Street Journal, recounting the manner in which “gumshoes from the Interior Department’s Fish and Wildlife Service” attended a ceremony so as to apprehend the feathers even as they “were being used in the peaceful exercise of religion.”

Never mind that many of the 42 feathers had been given to him, the Journal pointed out. And never mind that Soto hadn’t killed the birds. The Migratory Bird Treaty Act makes the mere possession of such objects illegal without a permit. And as such it highlights one of the difficulties are engendered by a patchwork of tribal recognition rules.