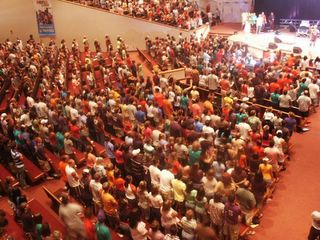 Brethren National Youth Conference in Ohio is at the mid-point today, with about 2,600 teens, youth pastors and youth leaders attending the event. In the communications office, we have a half-dozen writers and photographers who are writing articles daily and posting hundreds of BNYC photos on the internet under the direction of CE National’s Steve Koontz at www.bnyc.net.

Here, as a sample, is an article on this morning’s main session. You’re encouraged to log onto the BNYC site regularly for updates, and also to volunteer to pray for specific sessions and programs.

The Tuesday morning main session of BNYC – about midpoint in the five-day conference – opened with the characteristic energetic sounds of the BNYC youth choir, directed by Tammie Robinson.

A fast-moving video review of the first half of the conference created by Jay Delp had the teens on their feet cheering as they saw themselves in activities, “hang time,” Power Trax, main sessions, and more.

The winners in the various brackets of the “Faster For The Master” pedal-car races yesterday, sponsored by Grace College, were announced. Grand-prize winners (awarded ipod shuffles) were the team of Brendon Palmer, Hallee Palmer, Daniel Purdy, and David Heimann.

Jeff Bogue announced the results of the previous evening’s BNYC offering, which will be split between Urban Outreach Training Center in Philadelphia (10 percent), building a new Training Center on the CE National campus in Winona Lake (45 percent) and orphan-care outreach in Central African Republic (45 percent). As of this morning, the offering totaled $41,359, according to Bogue.

Todd Proctor and his band led an energetic praise and worship time, and executive director Ed Lewis called attention to resources available at the BNYC bookstore and then led the teens in a moment of silence and prayer for the saving of children who are being lost every year to abortion.

More than 50 full-time and part-time youth pastors were called to the platform and several teens prayed for them, giving thanks for their dedication, influence, and love for teens and for the Lord.

Francis Chan, in his final appearance at BNYC 2005, took a unique approach by having his wife, Lisa, a former Miss Teen California, sing “Amazing Grace,” and he also incorporated questions-and-answers from the audience in his talk.

Some of the questions were about Chan’s church and his ministry, and others asked for biblical answers to questions like “Is separation, instead of divorce, a sin?” “Do you believe in speaking in tongues?” and more. Some asked for advice on how to help other teens going through difficult times, and others wanted to know how to witness without getting into arguments and Chan’s opinions on tattoos and piercings.

Tuesday is a very full day at BNYC. In addition to the variety of afternoon activities, there are two more main sessions today. Shawn McBride from Washington DC will speak at 6:15 p.m., and a late-night session at 9:30 p.m. will feature illusionist Toby Travis.