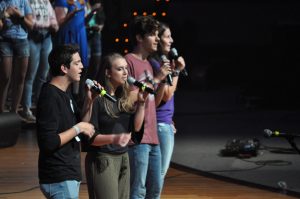 Students at Momentum on Wednesday night were encouraged to live with resolve, in spite of their circumstances.

Kondo Simfukwe took a look at Joseph, the Old Testament character whose life was a dark story of family abuse, betrayal, rejection, mockery, and abandonment and is found in Genisis 37.

“I love the story of Joseph because it reminds me that the power of resolve is greater than the pain of your past,” he said.

He recounted how Joseph, the favorite son, was attacked by his brothers, sold into slavery in Egypt, and imprisoned on a false charge. Yet he rose above his circumstances, ultimately becoming the second in command in the nation and in a position to help his family.

“Your past will always be a part of your story, but it doesn’t get to determine how your story ends,” Kondo said.

He stressed how Joseph honored God in spite of the circumstances.

The session, held in Indiana Wesleyan’s Chapel Auditorium was at the end of the first full day of the annual youth conference, which is sponsored by CE National. During the evening, Michel Faulkner was introduced as the new executive vice president of CE National. He shared about the Studies in Urban Ministries program held at Urban Hope in Philadelphia, with plans to expand it to other cities.

Thursday morning begins with back-to-back Power Track workshops, where students have a variety of topics to choose from. There are also sports tournaments, fun games, canvas painting, and other open activities to choose from. Louie Giglio is the speaker at the main session in the evening when Dustin Zerwas and Timothy Lansing will also take the stage.