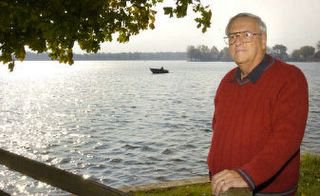 There is a touch of the Charlie Brown Everyman in each man and woman.
But the Everythingman is a rare breed indeed.

John J. Davis, president and professor emeritus at Grace College and Theological Seminary in Winona Lake, hasn’t done it all. Just more than most men and women.

He drove stock cars one summer as a teenager, is a self-taught banjo and guitar player, and he conducted game-day chapel services for University of Michigan football players and coaches in the 1970s during coach Bo Schembechler’s tenure.

“They never lost a game when I did chapel,” Davis happily reports.

“Emeritus” means retired, and the 69-year-old New Jersey native did retire in 2004.

Retired but not idle. He still takes the pulpit on Sundays in Midwestern churches of all denominations. He still does fishing seminars “all over the country – Maine to California” focusing on largemouth bass.

And, there is the research and writing for the books.

Study, reading and writing have long been a part of who John Davis is. He recalls in 1959, when he and his wife, Carolyn, came to Indiana for his graduate study at Grace Theological Seminary. They brought with them “a 3-month-old daughter, two suitcases and a trailer full of books.”

The living room of the Big Chapman Lake Home the Davises have shared for 40 years provides a full view of the lake, as does a screened-in room where the couple spend relaxing moments.

To escape the lure of the bluegill, writer Davis works in a study with floor-to-ceiling books lining one wall. He puts the number of volumes at 6,000.

It is to this room, where books share space with fishing gear and framed tributes to his many accomplishments, that Davis takes his morning coffee and settles in behind the desk shortly after 5 a.m.

If a project is pressing, he might work there until 11 a.m. five days a week. Otherwise, he’s on a Monday, Wednesday, Friday schedule.

Two of the books Davis currently is writing are expected to be published in 2006, he says. Both are expansions of already-published works: “Contemporary Counterfeits” and “Islam, Terrorism and the Middle East.”

Speaking of the former, he says it will carry the subtitle “Biblical Evaluation of the World of the Occult” and will include “research into astrology, numerology and Satanism – those sorts of practices.” He also mentions that for this book he has interviewed three witches.

“Islam, Terrorism and the Middle East,” Davis says, “is pretty well on its way. The research is about done. It will deal with the background of Islam, its origin and basic teachings and will focus on its teachings relative to warfare and jihad and what it does and does not mean.”

The 13 archaeological tomb expeditions, from 1963 to 2003, for which he served as senior supervisor, put him in day-to-day contact with Arab Muslims.

“I lived with them. I know how the average Muslim lives and thinks,” Davis says.

“Some are very hospitable, once you gain their friendship. They’re not to be confused with radical forms of Islam.”

A third book, for which research �is about done, is tentatively titled “Where Was God When I Needed Him?”

“Why,” Davis asks, “do good and godly people suffer when violent, wild and wicked people prosper – or are in good health? It’s a real dilemma. Even biblical writers agonized over that same question.”

Other books Davis is writing are commentaries, one on the Old Testament book of Jonah, the other on the book of Obadiah.

He enjoys writing humor – and has, mostly relative to fishing – but finds it “more challenging. Timing is everything . . . selection of phrases … vocabulary … effective use of exaggeration.”

Fishing, Davis says, is something he’s done all his life, adding, “I probably had a fishing rod in my hand before I held a spoon. It was a family affair. It’s a passion that never left me. I say it’s the only true biblical sport because seven of the 12 disciples were fishermen.”

He and Carolyn “fish together, lots of places – lakes and rivers – and Big Chapman Lake.”

While fishing has been a lifetime passion, it wasn’t until 1954, when he was a student at Audubon (N.J.) High School, that Davis discovered archaeology.

He participated in a dig at a Revolutionary War military installation in South Jersey where he unearthed musket balls and domestic ware.

The Mideast tomb excavations, for which Davis supervised anywhere from five to 15 simultaneous digs, were the burial sites “of ordinary people, city officials, prominent families. The most number of rooms was three.”

Davis’ most exciting moment was the 1982 discovery in Tel Abila, Jordan, of his first “unrobbed, untouched Roman tomb” from the second century.

“It was the tomb of a very wealthy, prestigious family. All the walls were painted … (showing) human beings. It tells us how people dressed,” he says.

Davis’ primary interest is not artifacts. He’s more “fascinated by skeletal remains because we really learn something about the people themselves … their profession, diet, height, how they died.”

In high school, Davis read Lewis Sperry Chafer’s seven-volume “Systematic Theology,” but it wasn’t until his student days at Trinity College in New Port Richey, Fla., that he considered teaching or the ministry as his life’s work.

He chose the ministry.

He does not like being stuck in a rut. He does like the challenge of a new enterprise.

“Perhaps,” he muses, “visit a part of the world I haven’t been in. I have visited and taught in 39 countries.”

He thinks a moment, then says, “Africa … I’ve never been to Africa.”