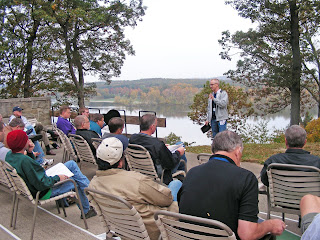 It’s been more than 24 hours since the Central Focus Retreat ended at the Mohican Lodge near Loudonville, Ohio. Here’s one last chance to revisit the scenes of the two-day get-away for Grace Brethren pastors from around Ohio, Indiana, and eastern Pennsylvania. To view an album of photos from the retreat, taken by Ron Boehm and Liz Cutler Gates, click here or on the photo above.

John McIntosh, moderator of the Fellowship of Grace Brethren Churches and pastor of the Grace Brethren Church in Simi Valley, Calif., led the retreat. He was assisted by Tom Hocking, moderator elect and pastor of the Bellflower Brethren Church in California. Beginning on Monday afternoon (October 13), The two led the pastors through a study of 2 Timothy, the foundation for this year’s emphasis on “Deposit Required.” There was plenty of time for relaxation and fellowship, as the men engaged in a lively game of Scream-O on Monday night and spread out around the area on Tuesday afternoon to hike, bike, and golf.