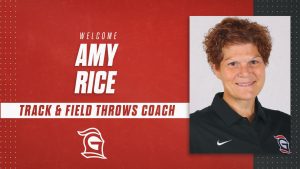 “Track has always had a special place in my heart. I love helping athletes grow and develop after putting in the work,” Rice said. “I am extremely excited to join two incredible coaches in Coach Moffitt and Coach Poyner, who bring so much knowledge, experience and energy to the track and distance programs. I look forward to learning from both of them on this amazing journey.”

Rice is a local product, graduating from Warsaw where she still holds the school’s shot put record. She attended NCAA Div. I Indiana State, where she competed at a high level from 1993-97.

She was an All-Missouri Valley Conference performer in the shot put from 1994-97, including winning the conference in 1995, 1996 and 1997. She was ranked in the NCAA’s top 25 for shot put during her senior year.

She competed in the World Sports Exchange/Junior Olympics competition in Barcelona in 1993 and received a gold medal in the shot put and a silver medal in the discus.

“We are thrilled to have Amy join our coaching staff. Her attention to detail and success as a Division I athlete will help grow our team and help us take that next big step in the right direction,” Moffitt said. “Her ability to connect with and energize our athletes will be key to the development of our throwing core.”

Rice was a throws coach at Grace immediately upon her graduation from Indiana State for a season. She has also coached around the area, including multiple years at Warsaw Community High School and Lakeview Middle School as well as Lakeland Christian Academy.