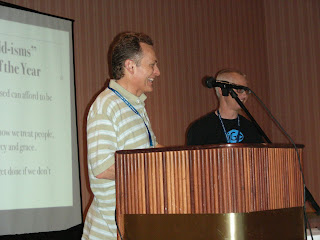 “He has demonstrated competence and faithfulness in pastoral ministry for 37 years,” said Tom Hocking, pastor of the Grace Brethren Church in Bellflower, Calif., who made the presentation.

“This guy has been a real friend to me and has been used by God to both encourage and direct me in my own ministry,” he added. “This pastor has served in his current city since 1983 and consequently is well-known by people in the political, educational, business, and law enforcement circles of his community. He has been an active part of the Southern California-Arizona District for decades and has served faithfully on the board of CE National for many years as well. He has been mentored in ministry by the likes of Roy Roberts, David Hocking, and David Seifert, educated at Bob Jones University, Biola University, and Talbot Seminary, and is within a few months of his 25th anniversary of ministry at Whittier Community Grace Brethren Church.

Hocking noted several characteristics of Todd: energetic generosity, innovative administration, and faithful service for the Lord and for people.

“Richard served on the CE National board for more than 10 years,” Hocking noted. “He developed the WORD books for children to help kids understand things like salvation, baptism, communion, giving, and other topics.”

Hocking also noted Todd’s dedication to his family. “Rich’s love for Jesus is fleshed out in his love for Claudia and his boys.”