Rick Warren recently credited Anabaptism with shaping him and his books. Here is an excerpt–to read the entire article, click here. 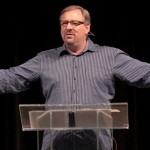 Renowned evangelical pastor and author Rick Warren recently said Anabaptism has shaped him, his books and his 20,000-member church in Southern California.

Rick Warren speaks on the impact his study of Anabaptists has had on his approach to discipleship at Saddleback, his Southern California megachurch. — Photo by Adam Covington/SWBTS

“For 32 years, we have been building Saddleback Church on the lessons I’ve learned from the Anabaptists,” he said at a conference on “Anabaptism and Contemporary Baptists” Jan. 30-31 at Southwestern Baptist Theological Seminary in Fort Worth, Texas.

The seminary is affiliated with the 16-million-member Southern Baptist Convention, the world’s largest Baptist denomination and the largest Protestant body in the U.S.