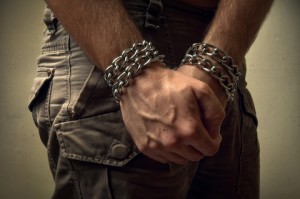 The pastor of the Grace Brethren Church in Colorado Springs, Colo., remembers meeting Carlos four years ago in the county jail. “I actually went to visit another man,” remembers Schaffer, “This man introduced me to Carlos and we began to visit via video feed.”

Carlos had been arrested for the third time and he was waiting on a trial date. As part of a deal agreement, he was offered a 20-year sentence. Otherwise, he faced a possible 25-years-to-life as a third-time offender. He had hit the bottom, and he began to read a Gideon Bible. He found Christ, and he wanted to be discipled. Right on time, God arranged for Schaffer to meet him.

“For two years we read and studied the scriptures together,” remembered Schaffer. “I sent him books, which he consumed, and we discussed a lot of issues. I sought to temper and mold him as I detected a sense of arrogance growing, and the Holy Spirit was able to work.”

Carlos had lost everything. Schaffer was his only lifeline to the outside.

When it was time for Carlos to appear before at arraignment, Carlos was expecting a 20-year sentence. At sentencing, the judge asked Carlos to speak.

“I was awestruck as Carlos humbled his heart and began to share his testimony,” Schaffer recalled. “He talked about how God had changed his life and how he was on a new path. I have heard all of this before, but this time it was different. There wasn’t a dry eye in the courtroom, and one could have heard a pin drop.”

The judge was stirred. “She sees hardened criminals every day who give the religious pitch, but she was moved to tears as she listened with intent.”

When Carlos was done, it was silent. The judge noted the difference in demeanor, his sense of humility, and the reality of his faith. She waived the three strikes that he had acquired then ordered the district attorney to make a better deal. Ultimately, Carlos was sentenced to prison for eight to 12 years, essentially cutting his potential sentence in half, according to Schaffer. (The pastor also said that the judge also ordered his attorney to submit within the year a document for a reduction of sentence.)

For the next few years, almost weekly Schaffer made his way to see Carlos in prison in Cañon City, Colo., more than 45 miles away. He would send books, which the two read separately and then discussed in person over games of Skip-Bo.

“My goal was not only to disciple but also to have fellowship with Carlos,” noted Schaffer. “I came to realize that the door swung both ways.” The pastor says that in Carlos’ free time, the inmate led several Bible studies. When they would come to a difficult passage, Carlos would defer. “I have to ask my pastor.” On the next visit, the two would talk through the verses.

The Colorado Springs church joined in by sending cards and letters to the prison. Carlos’ cellblock became, in effect, the Grace Brethren Church’s satellite congregation.

Carlos is now in a halfway house – ahead of schedule on his sentence. Carlos’ relationship with God continues to grow. “I send him manuscripts of the messages I preach, which he devours and about which he is full of questions,” Schaffer said. “Because of good behavior, we have been able to have some intense phone conversations twice a month.”

In January, Carlos will be allowed to receive passes and will be able to come to the church for the first time.

“When his parole ends in May, he will be living with my family,” added Schaffer. “He has become one of us. I was able to bring my wife, Cathy, to see him once, as she wanted to meet this incredible man. He wants to serve God in whatever God leads him to do.

“The story is not yet over,” Schaffer emphasized, “but it is an incredible act of God! Isn’t God good?” — by Julia Marsh

What is your story? When has God met you “right on time?” In the comments section below, share how God has met you at just the right time.