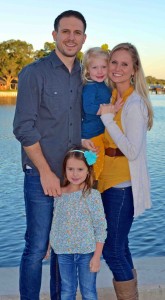 Wade and Anna Rininger and family

GBCanada has announced that Wade and Anna Rininger are joining the church-planting team in Canada.

“While we were praying for God to direct us, we received a call from Nathan Bryant, asking us to consider coming to Canada to help start a church,” recounted Wade. He and his wife Anna are excited for the opportunity to start something new in Canada.

Starting his Biblical training with the 412 Commission, Wade also attended BILD’s Antioch School of Church Planting and Leadership Development. After serving a one year internship with the former Grace Brethren North American Missions, Wade served as associate pastor at Penn Valley Grace Brethren Church in Pennsylvania as a member of the pastoral team helping to plant the Bux-Mont campus. In the fall of 2012, Wade and Anna felt led to move to the Tampa Bay area to assist Anna’s dad, Pastor Randy Weekley, at Pinellas Park Grace Brethren Church near St. Petersburg, Fla.

“Our heart is to be on mission wherever God wants us involved in church planting,” Wade added. After three years at working to launch Watershed GBC, there seemed to be many roadblocks and so during a prayer for God’s leading, Wade felt the call to move once again, only this time farther north than he or Anna had ever considered. Another country — Canada!

Wade is no stranger to the GBCanada team and personally knows many of those serving in Canada, including Bartley Sawatsky, pastor of Grace Community Church, Mississauga, Ontario, and current executive director of the Fellowship of Grace Brethren Churches.

“We’re excited to have Wade not only join our church-planting team but our Mississauga church as well to fill in for Andrew,” stated Bartley.

Wade will be joining the staff of Grace Community Church as a temporary youth director, while Andrew Wood attends seminary classes at Grace College and Seminary in Winona Lake, Ind. Wade and Anna will be moving into a new community near Mississauga where there are no churches and working with an entrepreneur Canadian couple, Mike and Genevieve Amaral, who want to start a café to attract the unchurched. The plan is to develop a team and launch a new multi-site church through GCC in the fall of 2016.

“We are very excited to have Wade and Anna join our team,” Nathan enthusiastically responded. “They will be a great asset to Mike and Genevieve and our GCC staff.”